"She does not want this to affect Joe Biden's campaign," the woman's attorney has said. "She just wants this baby to get financial support from the baby's father"

On Monday afternoon, former Vice President Joe Biden‘s son Hunter Biden responded to a lawsuit filed against him in Arkansas earlier this year claiming that he fathered a child last summer but has not acknowledged his paternity or provided child support.

In a brief answer to the suit, Hunter, 49, denied all of the allegations made against him by Lunden Roberts, PEOPLE confirms. An online docket for the case did not list any upcoming hearings.

Hunter — whose tumultuous personal life returned him to the headlines this year as his father launched a presidential campaign against Donald Trump — was sued by Roberts in late May in Independence County, Arkansas. She sought to have the court confirm her child’s paternity and order Hunter to pay child support, including health care costs, according to court documents reviewed by PEOPLE.

Roberts’ suit stated only that she and Hunter “were in a relationship” and had a child born last August in Independence County.

Roberts “really values her privacy,” her attorney, Clint Lancaster, previously told the Arkansas Democrat-Gazette. “This is a parenting and child support issue between her and Mr. Biden,” he said.

Roberts said she met Biden while she was a student at George Washington University, according to the Democrat-Gazette.

Lancaster’s office told PEOPLE in June that he was not commenting further on the case. Hunter’s Arkansas attorney Bart Calhoun referred questions from PEOPLE to a representative for Hunter, who did not immediately return a call.

RELATED VIDEO: Joe Biden Announces He Is Running for President Against Donald Trump

In a candid profile published by The New Yorker in July, Hunter addressed his relationship with Hallie, his nearly overnight marriage to Cohen and his years grappling with substance abuse issues.

“Everybody has trauma. There’s addiction in every family. I was in that darkness,” Hunter told the magazine. “I was in that tunnel — it’s a never-ending tunnel. You don’t get rid of it. You figure out how to deal with it.” 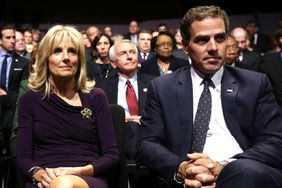