Abedin's memoir Both/And: A Life in Many Worlds details how she handled Anthony Weiner's lies, her pregnancy secret getting exposed and the way her boss comforted her during a public scandal

Huma Abedin is revealing the heartbreak, fear and pain of her ex-husband's sexting scandal, its personal and political repercussions and how Hillary Clinton comforted her when an intensely private matter — her pregnancy — became public.

In an excerpt of her upcoming memoir, Both/And: A Life in Many Worlds, published in Vogue, Abedin, 45, recalls the painful moment her then-husband, New York Rep. Anthony Weiner, came clean about what she calls an "infuriating, deeply inappropriate, juvenile, crass, and stupid" decision.

In 2011, Abedin worked as then-Secretary of State Clinton's chief of staff, crisscrossing the globe with the nation's top diplomat during President Barack Obama's administration. In May of that year, she and Weiner shared a sweet secret — that Abedin was newly pregnant — when he first told her his Twitter account had been hacked.

"Someone posted a photo. There might be a story, but I am working on fixing the problem. Nothing for you to worry about," he said, Abedin writes in her book.

That, of course, was a lie.

As media coverage of what Abedin calls "an indecent image of a man wearing gray boxer briefs" posted to her husband's Twitter feed exploded, the congressman defended himself publicly, sticking to the hacker story.

Abedin writes that she buried herself in work and assured her boss "that it was nothing and that Anthony's team hoped to discover the perpetrator soon."

Then during a weekend away at their friends' home, Abedin writes that she found her husband in despair. When she asked him what's wrong, he told her that he had sent the photo and lied about it.

"Just like that, life as I knew it was officially over," she writes.

Abedin writes about being overwhelmed emotionally — "I felt something explode inside my chest, and suddenly it was hard to breathe. I was simultaneously filled with rage and stunned to my core. It felt like a bolt of lightning had struck me and run straight through my body" — but says in the moment she insisted he start telling the truth to everyone else.

During a flurry of phone calls that took place at their friends' home as Weiner and his team set up a press conference to tell the world what really happened, "I left Anthony to deal with the details and walked out to the deck overlooking the pond," she writes. "I breathed in the warm air as I looked out at the placid water, every fiber in my body screaming: What is happening to my life?"

She continues: "The shock, the fury traveling through each cell of my body, was more for my child than for myself."

Amid the fallout, Abedin writes that she tried to ignore news coverage of her husband's scandal to protect her mental health but that proved impossible when Clinton's press advisor Philippe Reines called to tell her The New York Times was preparing to report that she was pregnant.

"I felt the heat rise in me as I struggled to keep calm. No, no, no. This was my body, my special secret. Isn't this what women get to do? Isn't this a rite of passage that people are entitled to?" she writes of her reaction.

"The fact that I could not share my pregnancy news the way I had wanted, with the people I loved, is a trauma that stays with me even now. Everything else was awful, but this was something else—my once-in-a-lifetime gift," she continues. "A full decade later there are many days when I am in the shower or cooking dinner or browsing in a shop, and I hear the words 'I am pregnant' emerge from my lips, without any conscious intention, as though my brain is reminding me I never got to say it when it mattered most to me."

The day before Abedin accompanied the Secretary of State on a trip to the United Arab Emirates in June of 2011, she met with Clinton, who offered "careful congratulations" on the pregnancy, Abedin writes, adding that Reines had likely told her.

" 'I wanted to tell you myself,' was all I could get out before I burst into tears. She walked me over to the window seat, sat with me, rubbing my back, trying to reassure me, telling me over and over again that it was going to be okay," Abedin writes.

Though Clinton offered to let her stay behind, Abedin boarded the secretary of state's plane. By the time the team landed in the UAE, the pregnancy news had broken.

The trip "was business as usual," Abedin writes. "Except, I was no longer anyone usual. I was now the thing in the room that everyone avoided talking about."

She 'Fell on Her Own Sword': How Huma Abedin Left the Clinton Campaign Trail After October Surprise Involving Her Disgraced Husband

Abedin says that she feared causing awkwardness for her boss during meetings with their foreign hosts but that Clinton made a point of introducing her. "At a moment when any other politician might have disappeared her embarrassing staffer, HRC signaled to the entire world that she wasn't ashamed of me," she writes.

Another, more overt gesture also demonstrates Clinton's kindness in handling her advisor's private crisis that had turned so public.

After a day of meetings in the UAE, Abedin writes, Clinton told her to go to her room to meet with people who wanted to see her. Though she thought it was work-related, Abedin was surprised to find out that Clinton had arranged for her mother and brother to join her at the hotel.

Over a spread of fresh fruit, dates, and chocolates, Abedin and her family "sat together, silent for some time, a little pod of gloom and love," she writes.

Later, when Clinton joined the group, the conversation "turned toward the baby, my maternal health, and plans for the future," Abedin writes. 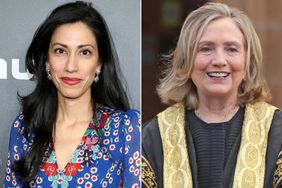