In a new BBC documentary ahead of the 20-year anniversary of the attacks, the former president also said he was confident in his choice to invade Afghanistan

Ahead of the 20-year anniversary of 9/11, former President George W. Bush is looking back on the moment he found out that a second plane had hit the World Trade Center — and that an attack was underway in America.

In the new BBC documentary 9/11: Inside the President's War Room, Bush details the emotions he felt when he first learned about the attack on Sept. 11, 2001. His reaction was famously captured on camera during a previously scheduled school trip.

At the time, he was visiting Emma E. Booker Elementary in Sarasota, Florida, where he was reading to a room of young children when White House Chief of Staff Andy Card delivered the news.

"Andy Card comes up behind me and says, 'Second plane has hit the second tower. America is under attack.' And I'm watching a child read," Bush recalled in the documentary, which premiered Tuesday. "And then I see the press in the back of the room beginning to get the same message that I just got."

"And I could see that horror … on the face of the news people who had just gotten the same news. During a crisis it's really important to set a tone and not to panic," he continued. "And so I waited for the appropriate moment to leave the classroom. I didn't want to do anything dramatic. I didn't want to lurch out of the chair and scare the classroom full of children, and so I waited."

Bloomberg reporter Richard Keil, who was in the classroom at the time, said in the documentary that he had been "intently" studying the president's reaction.

"His mouth was kind of drawn and tight, and there was almost for a brief moment a kind of startled look in his eyes and also a weightiness to him, if you will," Keil said. "I could tell he was really focused on trying to get through that event."

Card told filmmakers he "had to deliver a message that the president didn't expect to hear and was almost unbelievable," adding, "It also literally was the message he had to hear, whether he wanted to or not."

While on the way to the school that morning, Ari Fleischer, then the White House press secretary, said that he got a message on his pager that an airplane had flown into World Trade Center but was given no further information.

When Karl Rover, a senior adviser to the president, informed him the first plane had flown into the World Trade Center, Bush was puzzled.

"I thought it was pilot error. I couldn't imagine anything other than a lousy pilot getting lost," he said in the documentary.

He proceeded to enter the school and continue with his visit — only to be interrupted by Card, with word of the second plane.

After leaving the classroom, Bush boarded Air Force One. But officials were soon alerted that they could be a potential target in another attack that day.

"There was a call in to a switchboard that said, 'Angel's next,' " Bush said. "And Angel was the codeword for Air Force One." While the plane eventually landed safely, Secret Service agent Dave Wilkinson recalled, "Once we found that the president was a target, we take no chances. We've taken all the weapons away, we believe, we've done everything we can do — but you never know." (The eeriness and isolation of those hours were described at length in the 2019 book The Only Plane in the Sky.)

In the BBC documentary, Bush also reflected on the fighting sparked by the attacks.

He initially sent U.S. troops to invade Afghanistan weeks after 9/11, starting a war that largely shaped his legacy and only just ended.

Bush, who criticized the decision to withdraw from what had become a polarizing conflict, told BBC that he is still confident with his choice.

"I made some big decisions. Starting with the big thought of America being at war," he said. "And those decisions were not made out of anger, they were made with a goal in mind, which was to protect the American people. I think I was right."

When asked if he thought sending troops into Afghanistan "made the world a safer place," Bush replied, "You know, there weren't any other attacks on America."

"We'll let the historians sort all that out," he said. 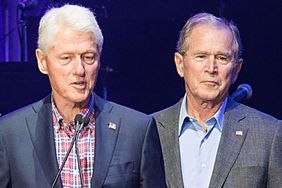