According to New York Magazine, the 43rd commander-in-chief had a rather candid response to Trump's swearing-in ceremony in January

George W. Bush has refused to publicly criticize those who succeeded him, but what did he really think of President Donald Trump‘s inauguration?

According to New York Magazine, the 43rd commander-in-chief had a rather candid response to Trump’s swearing-in ceremony in January.

“That was some weird s—,” he said according to the outlet, which cited three sources who heard the comment.

Twitter users erupted at the report, with some citing it as the “quote of the year” and predicting “whenever historians write about Trump’s inauguration, we *will* quote Pres. Bush’s take.”

Joe Scarborough of MSNBC’s Morning Joe also reacted to Trump’s comment, writing, “My love for this man grows by the day.”

The 45th president painted a bleak picture of the nation in his speech, saying that America had fallen into “disrepair and decay” and claimed the country’s best days had “disappeared over the horizon.”

A spokesman for the Bushes confirmed the former president and first lady cast their ballots for the election early, opting to write in a candidate for the office of commander-in-chief. Their choice for president was not revealed.

He also weighed in on the current administration’s controversial travel ban during an interview with Today‘s Matt Lauer.

“I think it’s very important for all of us to recognize one of our great strengths is for people to be able to worship the way they want,” said Bush. “A bedrock of our freedom is the right to worship freely.” 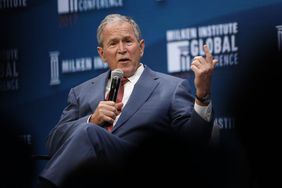 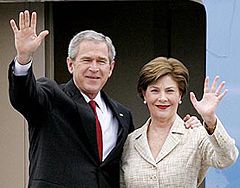 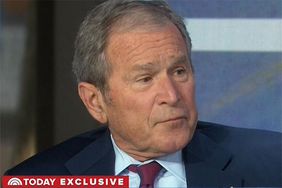