Three years after resigning in the wake of a sex scandal and criminal charges, former Missouri Gov. Eric Greitens is looking to return to politics, officially announcing his candidacy for the Senate on Monday.

Greitens, a Republican, former Navy SEAL and Rhodes scholar, announced on Fox's Special Report that he will run to succeed retiring Sen. Roy Blunt in 2022.

Greitens resigned as Missouri's governor in 2018 amid the fallout from a series of scandals, according to the Associated Press and other outlets. Most seriously, he was accused of trying to blackmail his former hairstylist with nude photos after having an affair with her.

The story first broke in January 2018 when, following a months-long investigation, KMOV published a report on Greitens' infidelity just hours after his second State of the State speech. The story was based on a secret recording made by the hairstylist's ex-husband.

Greitens and his wife, Sheena, confirmed that he had had an affair before taking office but he denied other wrongdoing.

"A few years ago, before Eric was elected Governor, there was a time when he was unfaithful in our marriage," they said in a joint statement. "This was a deeply personal mistake. Eric took responsibility, and we dealt with this together honestly and privately. While we never would have wished for this pain in our marriage, or the pain that this has caused others, with God's mercy Sheena has forgiven and we have emerged stronger. We understand that there will be some people who cannot forgive — but for those who can find it in your heart, Eric asks for your forgiveness, and we are grateful for your love, your compassion, and your prayers."

Greitens denied another part of the KMOV report, however: that he took a compromising photograph of the woman while she was blindfolded and threatened to publicize it if she exposed him, as she had claimed in the audio recording.

Her allegation ultimately led to a criminal case and felony invasion-of-privacy indictment against Greitens.

His defense insisted there was no evidence Greitens had taken a photo of the woman and no such photo has ever been found.

Months later, he was hit with another criminal charge for tampering with a computer following claims that he improperly took a donor list from his nonprofit veterans group to help his political campaign.

According to The Washington Post, the evidence in that case was gathered by then-Missouri Attorney General Josh Hawley, who now serves as the state's other U.S. senator.

Hawley, also a Republican, called on Greitens to resign in 2018.

Greitens denied wrongdoing in both cases.

He was also the focus of a bipartisan probe from the Missouri House of Representatives, which featured disturbing testimony from the hair stylist. She said that, among other things, Greitens had touched her without consent after blindfolding her during their 2015 encounter and coerced her into performing oral sex.

She also said he took photos of her during the encounter — she recalled seeing a flash through her blindfold — and said they would be used against her if she spoke about what happened. He called her a "little whore," she said.

"I was definitely fearful," she told the House investigating committee. "I was so embarrassed and ashamed." (Greitens denounced the investigation a "political witch hunt.")

The House committee likewise looked into the donor list and described Greitens as using it for his own campaign's gain as well as lying in his campaign finance reports.

Faced with possible impeachment proceedings, Greitens resigned in June 2018 but decried "legal harassment" and said he had not "committed any offense worthy of this treatment."

Shortly before his resignation, his invasion-of-privacy charge was dropped during jury selection after a judge ruled that the lead prosecutor could be called as a witness and Greitens' attorneys indicated they would argue the state had acted improperly.

The prosecutor said being called as a witness would make her position untenable.

Following Greitens' resignation, the computer tampering charge was dropped as part of an agreement with law enforcement.

"It is time for us to move on," Kim Gardner, the St. Louis circuit attorney, said at the time.

She added: "I remain confident that we have the evidence required to pursue charges against Mr. Greitens. But sometimes, pursuing charges is not the right or just thing to do for our city or state."

When asked about the allegations during his Fox News interview on Monday, Greitens insisted to host Bret Baier he had been "completely exonerated" and was "moving forward."

"Well, Bret, we hope the truth continues to come out in this race, and that the mainstream media will report it. After a twenty-month investigation by the Missouri Ethics Commission, they came out and said that we are completely exonerated," Greitens responded, before claiming that St. Louis Circuit Attorney Kim Gardner, who prosecuted him, was funded by George Soros and that her investigators had manufactured "a false case against me."

Greitens added that his resignation was "one of the hardest things I've ever had to do because I knew that all these accusations were false."

In a statement posted to his website Monday, Greitens made no reference to his past controversies. Instead, he cast himself as an "American patriot" and a "political outsider" who has already secured the endorsements of several of those in Donald Trump's orbit, including attorney Rudy Giuliani. 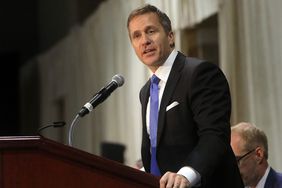