Eric Trump probably didn’t expect this reaction when he tried to sell some Trump-themed holiday spirit on Twitter.

President Donald Trump‘s middle son, 34, tweeted out several photos of Trump-themed Christmas ornaments on Monday, including two different mini versions of Trump Tower, a Trump-branded helicopter and a set of golf clubs (although social media users had difficulty identifying the last one).

“Love the all-new Christmas ornaments from our @TrumpStore team!” Eric captioned the photos.

Almost immediately, followers started bombarding the first son with jokes about a recent scandal in which the 45th commander and chief failed to attend a celebration of the WWI armistice at the Aisne-Marne American Cemetery and Memorial in France, allegedly because the rain prevented his helicopter from flying there.

“Does the helicopter have to stay in the box if it’s raining?” one woman tweeted.

“Rain not included,” added another.

“Anything in handcuffs?” asked a third.

The ornaments retail for $60, which was another point of contention among Twitter users.

“Seems reasonable,” wrote one person alongside a crying-laughing emoji.

“And the Trump Crime Family makes only $59.50 on each,” joked another.

Trump’s eldest son, Donald Trump Jr., also posted photos of the ornaments on his Instagram, prompting one user to ask what was pictured in the fourth photo in the series.

“It’s a set of golf clubs,” came the reply from the Instagram account for the Trump Store.

The initial helicopter controversy took place on Nov. 10, the day before D-Day. Among the people criticizing Trump’s decision to opt out of the ceremony was Nicholas Soames, Winston Churchill‘s grandson and a member of Parliament.

“They died with their face to the foe and that pathetic inadequate @realDonaldTrump couldn’t even defy the weather to pay his respects to The Fallen,” Soames tweeted, adding, “#hesnotfittorepresenthisgreatcountry.”

In its own condemnation of Trump’s absence, the progressive veterans’ group VoteVets referred to Trump’s quip in October that he was having a “bad hair day” after addressing reporters on a rainy day about the shooting that killed 11 people at a Pittsburgh synagogue.

“Donald Trump complained about having to stand in the rain, to speak about the massacre in Pittsburgh, because it messed his hair up (more),” the group tweeted. “Today, he will skip honoring fallen American heroes of WWI, and stay in his hotel room, because of some rain.”

For his part, Trump said he tried to get to the ceremony but the Secret Service wouldn’t allow it.

“By the way, when the helicopter couldn’t fly to the first cemetery in France because of almost zero visibility, I suggested driving,” he tweeted. “Secret Service said NO, too far from airport & big Paris shutdown. Speech next day at American Cemetery in pouring rain! Little reported-Fake News!” 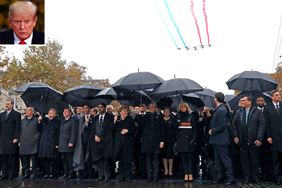 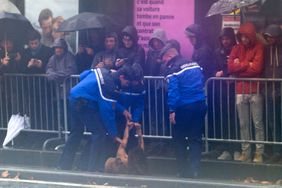