Donald Trump Spurns Ted Cruz's Invitation to Be His VP: 'I'd Go Back to Building Buildings'

Thursday night marked the first GOP debate of the official election year, and although seven candidates took the stage, all eyes were on Donald Trump and Texas senator Ted Cruz as they duked it out ahead of next month’s crucial Iowa caucus.

Sparks flew between the pair when moderator Neil Cavuto asked Cruz, amid a loud chorus of boos from the audience, to respond to Trump’s assertion that Cruz may not be eligible to be president because he was born in Canada.

Under this theory, not only would Marco Rubio and Bobby Jindal be excluded from the presidential race, but so would Trump himself: Trump’s mother was born in Scotland.

“On the issue of citizenship, Donald, I’m not going to use your mother’s birth against you,” Cruz said.

Although Cruz attempted to end the “birther” discussion there, Trump went on to claim that if Cruz wins the Republican nomination later this year, the Democratic party will undoubtedly file a lawsuit to investigate Cruz’s eligibility, potentially eliminating the Republican candidate from the race.

“So you have a big lawsuit and who the hell knows if you can serve in office?” Trump continued. “You should go out, get a declarative judgment and let the courts decide.”

Why, though, is Trump suddenly dredging up a topic that he readily dismissed last fall?

“Because now he’s doing a little bit better,” Trump said with a shrug, as the audience guffawed. “It’s true. I didn’t care before – he never had a chance. Now he’s doing better, he’s got probably a 4 percent or 5 percent chance.”

Cruz refused to admit any doubt in his eligibility for office, and offered a tongue-in-cheek peace offering to his main competitor.

“If this all works out, I’m happy to consider naming you as vice president,” Cruz said to Trump with a smile. “So if you happen to be right, you could get the top job at the end of the day.”

Trump replied, “I like that. But I think I’d go back to building buildings if it doesn’t work out.” 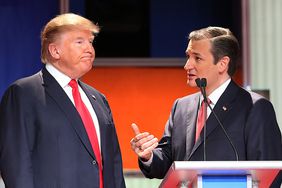 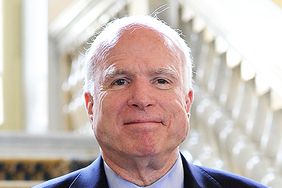 Karma? Ted Cruz Faces Mounting Charges He's Really Canadian and Not Eligible to Run for President: 'It's Worth Looking Into,' Says John McCain 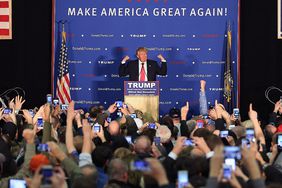 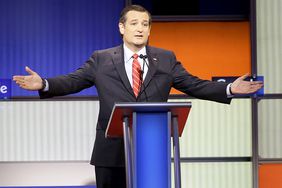 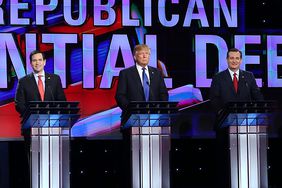 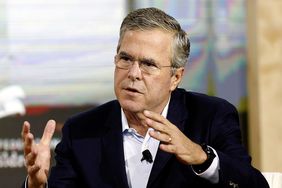 Donald Trump Says He May Sue Ted Cruz to Disqualify Him: 'I Already Have a Lawyer' 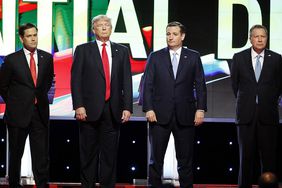