Asked for comment, a spokeswoman for Mrs. Trump says, "I'd encourage the anonymous source to say such things on the record"

President Donald Trump and First Lady Melania Trump had a disagreement at dinner while at Mar-a-Lago three weeks ago and could not keep it from public view, according to an eyewitness.

“Melania was upset and they had words with each other over something,” the source tells PEOPLE. The couple was eating together in the club’s dining area on March 30.

It remains unclear what the issue was, according to this source.

Ivanka Trump, the president’s eldest daughter, and her husband, Jared Kushner, dined that night at a separate table, the source says.

Mrs. Trump’s spokeswoman, Stephanie Grisham, disputed the witness’ account as “completely false” but did not elaborate — instead telling PEOPLE, “I’d encourage the anonymous source to say such things on the record.”

The president and Mrs. Trump, who are parents to son Barron, 13, regularly travel to Mar-a-Lago, in Palm Beach, Florida, on the weekends.

On March 30, the president spent much of the afternoon golfing and then spoke at a Republican fundraiser that night.

Curiosity about the Trump marriage has flared in the past, as when he tried and failed to hold her hand in front of the press or when multiple women accused him of being unfaithful. The president denied those allegations.

Mrs. Trump said in an interview last year that she was not fazed.

“It is not a concern and focus of mine,” she told ABC News. “I’m a mother and a first lady and I have much more important things to think about and to do. I know people like to speculate and the media like to speculate about our marriage.”

“It’s not always pleasant, of course,” Mrs. Trump said. “But I know what is right and what is wrong and what is true or not true.”

RELATED VIDEO: Trump Fires Back After Melania Is Criticized for ‘I Really Don’t Care’ Jacket

The first couple’s recent Florida trips have been clouded by the end of Robert Mueller’s investigation into the president and the Russian government, which interfered in the 2016 election in order to help elect Trump.

On March 22, about a week before the witness saw the Trumps fighting, Mueller concluded his investigation.

Within days, the attorney general released a four-page summary of Mueller’s conclusions, including that he did not find that anyone on Trump’s team conspired or coordinated in the Russian election interference.

The president declared it a “total exoneration,” and a White House spokesman told reporters on March 24 that Trump was “in a really good mood” over Mueller’s findings.

That jubilation was complicated last week by the release of Mueller’s full report, with some redactions, which showed a president sometimes being restrained from his worst impulses by a staff who simply refused to do what he said.

“Statements are made about me by certain people in the Crazy Mueller Report … which are fabricated & totally untrue,” the president tweeted last week, labeling some of the report’s contents “total bulls—.”

But Mueller was not totally forgotten.

A club source tells PEOPLE: “There was no question that the contents of the Mueller report released last week, and the subsequent news and TV air time devoted to it, were weighing heavily on [the president’s] mind, distracting him at times.” 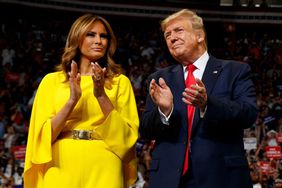 Donald Trump Said That Melania Wouldn't Cry 'Her Eyes Out' If He Was in a Tragedy: Report 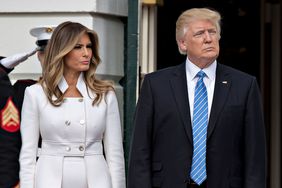 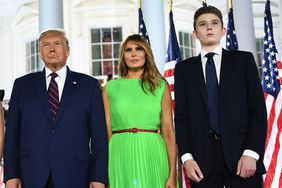