The former president and his oldest son signed a contract to provide commentary during the event, headlined by Evander Holyfield vs. Vitor Belfort

Former President Donald Trump and his oldest son, Donald Trump Jr., will spend Saturday night providing commentary on a boxing match — for a price, of course.

ESPN reports that the father-son duo signed a contract to comment during the telecast, which also happens to be the 20th anniversary of the Sep. 11 terrorist attacks.

The boxing event at the Hard Rock Hotel & Casino in Hollywood, Florida, will be headlined by Evander Holyfield vs. Vitor Belfort. It will air on the FITE streaming platform.

Donald Trump is 'Still the King': Journalists on Interviewing the Former President at Mar-a-Lago

"I love great fighters and great fights," the 75-year-old former president said in a statement, according to USA Today. "I look forward to seeing both this Saturday night and sharing my thoughts ringside. You won't want to miss this special event."

He has spent much of his summer at his property in Bedminster, New Jersey, often railing about his election defeat and his successor, Joe Biden.

He also hosted a July press conference in which he claimed he would be suing several social media platforms — including Facebook, Twitter, and Google — that banned him in the wake of the Jan. 6 riot on the U.S. Capitol by his supporters. (He remains barred from all major social media platforms.)

Trump's suit against Google comes after YouTube (owned by Google parent company Alphabet) also banned his account following the attempted insurrection. The company has said it would lift its suspension of the former president's channel when it determines the risk of real-world violence has decreased.

He's also publicly mulled another run for president but has yet to publicly announce anything. He has, however, unveiled several fundraising gimmicks, such as his so-called "Trump Cards" announced in August.

In June, Trump announced an upcoming stadium tour with conservative pundit Bill O'Reilly, saying it would launch in December with events in four cities: Sunrise and Orlando in Florida and Dallas and Houston.

In a release announcing those events, Trump described them as, "wonderful but hard-hitting sessions where we'll talk about the real problems happening in the U.S., those that the Fake News Media never mention." He added that the tour would be "fun, fun, fun, for everyone who attends!"

Though early reports had indicated that tickets sales for the events were lackluster, the former president and former Fox News host have disputed that.

A divisive figure nationally, Trump remains robustly popular with GOP voters and came out on top of a Republican nomination poll conducted at the CPAC gathering in July, getting 70 percent of the ballots, according to Fox News.

When Will Donald Trump Return to Twitter? Not for 'At Least' a Few Weeks, Says Elon Musk 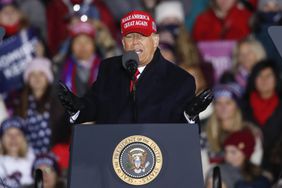