President Donald Trump and wife Melania Trump are facing the public together — and hand-in-hand — one week after Stormy Daniels’ bombshell 60 Minutes interview.

In their first public outing together since the interview aired, the first couple was seen holding hands on Sunday as they walked into Bethesda-by-the-Sea Episcopal church in Palm Beach, Florida, for an Easter service, according to a White House press pool report.

The president and his wife were also joined at the church by Trump’s younger daughter, Tiffany Trump, who flew into Palm Beach with her father on Thursday.

Trump also spoke highly of his wife on Monday as he addressed the thousands who gathered on the White House’s South Lawn for the annual Easter Egg Roll, crediting the 47-year-old for helping keep things in “tippy-top” shape.

“I want to really thank the first lady, Melania, who has done an incredible job. She worked so hard on this event, and I so want to thank you,” the president remarked at the beginning of his short speech.

“Also, I want to thank the White House Historical Association and all of the people that work so hard with Melania, with everybody, to keep this incredible house or building, or whatever you want to call it — because there really is no name for it; it is special — and we keep it in tip-top shape,” he said, adding that, “We call it sometimes tippy-top shape.”

Following the president’s remarks, he and his wife presided over the festivities as the egg roll races began, according to CBS News. The outlet also reported that the president’s sons Donald Trump Jr., Eric Trump, and Barron Trump were seen at the event, as was daughter Tiffany.

According to a White House pool report, Donald and Melania flew back to Washington, D.C., for the event on Air Force One alongside the president’s children. Also present on the flight were Trump Jr.’s estranged wife Vanessa, who filed for divorce last month, and the couple’s five children — Kai Madison, 10, Donald III, 9, Tristan, 6, Spencer, 5, and Chloe, 3.

“She’s focused on being a mom and is quite enjoying spring break at Mar-a-Lago while working on future projects,” said White House Director of Communications for the first lady Stephanie Grisham.

The White House has denied Trump had an affair with Daniels.

The first lady arrived in Palm Beach two days before the interview aired, and made headlines for remaining in Florida with the couple’s 12-year-old son, Barron, instead of accompanying her husband back to Washington, D.C.

When asked about Mrs. Trump’s travel arrangements last week, deputy press secretary Lindsay Walters said in a statement that “the first lady will be staying in Florida as is their tradition for spring break.” 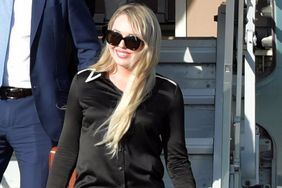 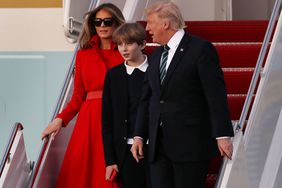 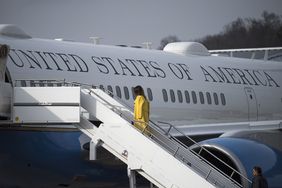 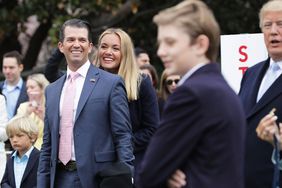 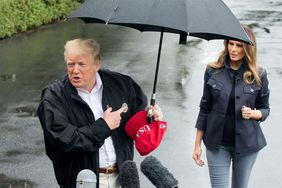 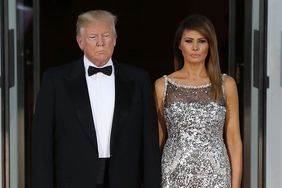