"Everything our fans have been saying – and they were beaten down for and called conspiracy theorists – and now it's in black and white," says a Bernie Sanders campaign staffer

It was a chaotic scene on Monday as ousted Democratic National Committee Chairwoman Debbie Wasserman Schultz, straining over screaming protesters, addressed delegates of her home state of Florida.

“So I can see that’s little bit of interest in my being here and I appreciate that interest,” the Florida congresswoman told delegates. “And a little bit of interest from the press but that really shows you that Florida is the most significant battleground state that will make sure that Hillary Clinton is elected president of the United States of America. We are the state that will deliver the White House to make sure that we can continue to make the progress that we have been able to make under Barack Obama for the last eight years.”

As she spoke, she was met by both cheers and boos from the crowd. Demonstrators wearing Bernie Sanders shirts “started shouting and yelling, waving signs that said ‘Thanks for the ‘Help’ Debbie’ and signs that simply read ‘e-mails,’ ” Politico reported. “Shame!” came the cries of some audience members.

Although Wasserman Schultz’s resignation isn’t effective until after the convention ends Thursday, she announced on Monday that she would not gavel in the convention later that afternoon as planned.

“I have decided that in the interest of making sure that we can start the Democratic convention on a high note that I am not going to gavel in the convention,” she told the Sun Sentinel, according to Politico.

The Wikileaks controversy that forced Wasserman Schultz to resign on Sunday threatens more than just the outgoing DNC chief.

The email scandal, which broke on the eve of Hillary Clinton‘s nominating convention, resurfaces questions about that other email scandal that has been plaguing the presumptive Democratic nominee for more than a year.

Clinton campaign manager Robby Mook’s allegation that the DNC was hacked by Russians as part of an effort to help GOP nominee Donald Trump prompted The Atlantic to ask: “Did a foreign country hack Clinton’s homebrewed server? Did her deleted emails, the thousands unrecovered by the FBI, include any embarrassing information now in the hands of another country?”

went on to say that the new email scandal “is part of a pattern that goes back decades. So righteous in their cause and paranoid of their enemies are the Clintons, that they cut corners to victory – even when, as was the case in the race against [Bernie] Sanders, they would likely win without shenanigans. Clinton Democrats stacked the DNC with people determined to smooth her path to the nomination.”

And this latest email controversy couldn’t come at a worse time for Clinton, as she attempts to appeal to Sanders supporters and unify the Democratic party in Philadelphia this week.

While some of the 20,000 DNC emails posted by WikiLeaks “criticized Clinton, the overwhelming number of anti-Sanders correspondences create an indelible impression that the DNC violated its oath of neutrality,” The Atlantic reported.

Put simply, the blow-up appears to validate what Sanders and his supporters have been saying all along – and what the Clinton camp has been denying all along – that the system was rigged against him.

Throughout the primaries, Sanders and his backers alleged that Wasserman Schultz’s connection to Clinton (she served as co-chair of Clinton’s 2008 presidential campaign) prevented her from being unbiased in the race. Specifically, Team Sanders claimed that Wasserman Schultz had rigged the delegate system and purposely scheduled Democratic debates on Saturdays and Sundays, when fewer voters would be expected to watch.

“Everything our fans have been saying – and they were beaten down for and called conspiracy theorists – and now it’s in black and white,” Rania Batrice of the Sanders campaign told ABC News.

Sanders himself called for Wasserman Schultz to step down, saying on ABC’s This Week on Sunday, “I think she should resign, period, and I think we need a new chair who is going to lead us in a very different direction.”

While some say Wasserman Schultz’ resignation could abate the email controversy, The Young Turks‘ Jordan Chariton argued that the scandal “ruins the DNC’s changes of rising above the RNC ‘clown show.’ ”

“What [Democrats will] likely see,” he writes, “is a sea of protesting progressives who stood behind Bernie Sanders throughout the primary and are now standing against Hillary Clinton and the Democratic establishment.” 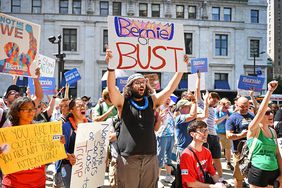