On the night she met her future husband, Alma Powell wore an excessive amount of makeup and dressed in unflattering clothes, hoping to prevent any sparks of romance between her and her blind date, a young soldier named Colin Powell.

Her efforts were unsuccessful, of course, and that first date in 1961 turned into almost 60 years of marriage before the much-admired general died on Oct. 18 of complications of COVID-19 at age 84.

Colin had agreed to go on a double date with his friend, the woman his friend was interested in and her friend, who turned out to be a young woman named Alma Johnson.

When she got a look at the "shy, almost baby-faced guy, his cheeks rosy from the cold," she decided to remove her makeup and changed her clothes in the bathroom, Colin wrote in his 2003 autobiography, My American Journey.

"She was fair-skinned with light brown hair and a lovely figure. I was mesmerized by a pair of luminous eyes, an unusual shade of green," Colin wrote. "Miss Johnson moved gracefully and spoke graciously with a soft Southern accent."

Alma was at first hesitant about dating a soldier and asked him during their date how much time he had left in the military. When he said he planned to have a career in uniform, "she looked at me as if I were an exotic specimen," Colin wrote.

Still, "I called Alma the next day and asked her out again." The pair soon became inseparable. She even taught him to dance. "Alma did a mean twist and tortured me until I became an acceptable twister," Colin wrote.

When she visited him at Fort Devens in Massachusetts, Alma — who grew up in Birmingham, Alabama, during segregation — was "struck" by how Black and white military families socialized together. "She fitted in from the start," he wrote, "getting along with the wives of my seniors through her appealing combination of deference and independence, as if she were born to the game."

During the early days of their romance, Colin worried about how his Southern sweetheart would fit in with his family, who liked to gather for boisterous, rum-fueled parties at his Jamaican immigrant parents' home the Bronx.

"A well-bred girl from a proper Southern family needed to be exposed gradually to noisy, noisy, fun-loving West Indians," he wrote in his autobiography.

There was no need to worry, however, and Colin soon proposed to Alma in summer 1962. They wed on Aug. 25 of that year at First Congregational Church in her hometown, with their families present despite some initial reservations on the part of the Powells about traveling to the Deep South.

As a newlywed, Colin arrived in Vietnam for his first tour of duty there on Christmas Day 1962, leaving his pregnant bride behind in what would become one of many sacrifices for the wife of a man who climbed the military ranks to become a four-star general and broke racial barriers in service as the first Black chairman of the Joint Chiefs of Staff and the nation's first Black secretary of state.

"I was married four months when my husband went to Vietnam the first time," Alma said during a 2006 interview about the role of military wives and families. "He was gone for a year. Our son was born while he was in Vietnam, and he didn't know he was born until he was 2 weeks old because there was not the instant communication. He was in the jungle up near the Cambodian border and depended on a military air drop once a week."

Alma called her role as a military wife "the defining experience" of her life and said in 2006 that she missed it at times, despite the challenges of raising three children — Michael Powell, Linda Powell and Annemarie Powell Lyons — with her husband who was often away in Vietnam, South Korea, West Germany or during Operation Desert Storm in Iraq.

"You're essentially a single parent, responsible for maintaining the stability of a home and that always remained your greatest challenge," Alma said in the interview. "Your job was to make a home wherever you were. We never pined for a place. Home was where we were together as a family, wherever that was."

As her husband's profile grew, Alma took on many roles outside of their home and raising a family. She wrote children's books and has served as the chair of the board of directors for America's Promise Alliance and as part of an advisory board on Historically Black Colleges and Universities for former President Barack Obama.

She also doted on her husband at home, leaving him comfort foods like warm soup for him to enjoy when he came home late from overseeing a war in the Persian Gulf, according to a 1995 Newsweek profile of the couple

But when Colin was contemplating a presidential campaign ahead of the 2000 election, Alma reportedly drew a line.

"Whatever I do we will do as a team," he told Ebony magazine, according to Newsweek, "[The presidency] is the only job in public life where the spouse gets a title and a role to perform. And so we both will have to be comfortable with it."

Which Alma was not.

Journalist Bob Woodward wrote in his book Bush at War that she said she would leave her husband if he decided to campaign for the White House. "Running for president, making her first lady was not what she wanted for her life," Woodward wrote.

Alma worried primarily about her husband's safety, Newsweek reported. Although she believed that Colin could protect himself on the battlefield, there was little he could do as president to ensure his own life, friends told the news magazine.

That article also raised as a factor the unpredictability of politics when compared to the familiar world of military service, which in 2006 Alma called "the most stabilizing" situation in her life because of its inherent loyalties, sense of duty and focused missions.

At a party to celebrate the Powells' 50th wedding anniversary, a friend praised Alma as a "woman who speaks her mind." Indeed, her husband never ran for president though his name would come up again and again over the years — despite his own career controversies, most infamously when he pushed for the invasion of Iraq in a 2003 U.N. speech and claimed, falsely, that Sadam Hussein held weapons of mass destruction. (Later in life, he said he regretted the episode while still arguing, "We had a lot of successes.")

At Colin Powell's stately funeral on Friday at the Washington National Cathedral, son Michael spoke of his parents' love and the home they created for their kids despite their strong commitments in service to their country.

"Our family life was unregimented. No morning revelry of marching drills. It was a warm and joyous and loving home anchored by our strong and graceful mother, Alma," he said. "Our parents taught us right. They taught us wrong. And they taught us to take responsibility for our actions and never to blame others. Disappointing them was the worst punishment we could imagine." 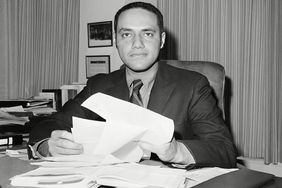