Cindy McCain on Future of Republican Party After Trump's Presidency: 'We Have Got to Overcome This'

"Our party's dead if we don't," Cindy McCain, the wife of late Sen. John McCain, said

Cindy McCain has spoken out about the future of the Republican Party.

On Sunday, during a conversation with CBS Sunday Morning correspondent Lee Cowan, the wife of late Sen. John McCain spoke about her grief and life without her husband, who died in 2018 to brain cancer.

"I never thought I would say this, I miss the chaos in the house. There was always action happening. It was always something," she said. "So I miss that. I miss the commotion and … I miss his partnership," she added. "And his friendship. And his love. And it's — you know, you just — it's day by day."

In addition, McCain also shared how the GOP has to move forward following Donald Trump's presidency. "Our side, it's swung way to the right. It'll come back. It'll come back," she said.

Noting the results of his second impeachment trial, McCain said Trump's acquittal after he incited the Jan. 6 insurrection at the U.S. Capitol shows that the Republican party is in danger of being defined by him.

"We have got to overcome this. We have to. Not just as a party. But as a country. We cannot allow this," she said. "I know something's going to happen. I know that much. Or our party's dead if we don't."

McCain crossed party lines and endorsed Joe Biden for president in September 2020, writing on Twitter that she's putting "country first" in her decision to vote for Biden

"My husband John lived by a code: country first. We are Republicans, yes, but Americans foremost," she wrote at the time. "There's only one candidate in this race who stands up for our values as a nation, and that is @JoeBiden."

"Joe and I don't always agree on the issues, and I know he and John certainly had some passionate arguments, but he is a good and honest man. He will lead us with dignity," McCain continued, adding: "He will be a commander in chief that the finest fighting force in the history of the world can depend on, because he knows what it is like to send a child off to fight."

Her support of Biden later led to her being censured by Arizona Republicans, which she called a "high honor."

"I'll wear this as a badge of honor," the widow shared on Twitter in January. According to AZCentral.com, the mother of Meghan McCain was censured because she "has supported globalist policies and candidates" and "condemned President Trump for his criticism of her husband and erroneously placed behaviors over actual presidential results."

While appearing on an episode of The View on Jan. 14, McCain told her daughter Meghan that she was "in good company, your dad was censured by them." 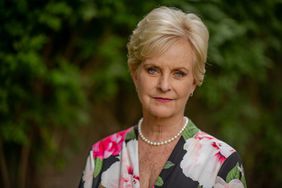