The creator of The Dick Van Dyke Show urged people to vote on Nov. 6

Carl Reiner wants to live until 2020 for one specific reason: to vote out President Donald Trump.

The 96-year-old television legend, who created The Dick Van Dyke Show, filmed a video to urge people to vote in the upcoming midterm elections and to share his own personal motivation for making it to age 98.

“On Nov. 6, we can vote for elected officials who will hold this president accountable,” he says in the video. “And after we’ve done that, my personal goal will be to stick around until 2020 and vote to make sure we have a decent, moral, law-abiding citizen in Washington who will make us all proud again to live in America.”

In the video, Reiner reviews the historic moments he has witnessed throughout his more than nine decades. “I’ve seen a lot of things in my lifetime. I lived through the Great Depression. I served in World War II in our fight to defeat fascism. I’ve seen the invention of television and performed on television even before my family owned one,” he says.

“In my 96 and a half years, I’ve seen a lot of things,” he concludes. “But the one thing I cannot bear to see is America being destroyed by racism, fear-mongering and lies. Fortunately, there is something we can do about that. … On Nov. 6, vote.”

“My father is 96 and a half years old. In his long life he has never seen anything like what’s happening to our country. I love him. And I want the country he fought his whole life for,” Reiner’s son, director Rob Reiner, tweeted on Tuesday, alongside the video.

Both father and son are vocal about their disapproval of the Trump administration on Twitter. The elder Reiner has blasted Trump for his appointment of Brett Kavanaugh to the Supreme Court, for his approach to foreign policy, his response to Sen. John McCain’s death and more.

“At 96 and 6 months I have an incentive to hang around [until] I’m 98 so I can vote for whoever runs against our fake President Trump,” Reiner tweeted on Oct. 17.

“Your reaction to my desire to live [at] least [until] I can vote for someone who will put the Trumpser in the dumpster, has caused me to smile the widest smile my lips are capable of,” he wrote later that day. “the one that broke out when I first looked into [the] faces of my 3 infant children.” 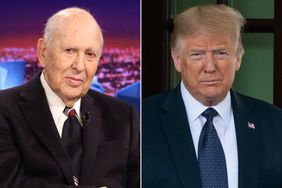