Virginia Republican Barbara Comstock told Chuck Todd on Sunday that she thinks that "maybe a few prosecutors" would look for Trump if he disappeared, but not necessarily any lawmakers

In spite of their continued support of Donald Trump, most Republicans likely wouldn't go looking for the former president if he were to suddenly go missing. At least, according to former GOP Rep. Barbara Comstock, who told Meet the Press host Chuck Todd on Sunday, "If Donald Trump disappeared tomorrow, I don't think you'd have many Republicans in the search party."

The Virginia Republican, 61, conceded: "Maybe a few prosecutors. But not Republicans."

Comstock, speaking to Todd about the recent move by Senate Republicans to block a bipartisan investigation into the Jan. 6 Capitol riots, said, "I understand Republicans want to get away from Donald Trump ... The problem is, he's not going to go away."

She continued: "This is not about Democrats or Republicans. It's about the country, and it's about getting to the truth. And it's about protecting the Capitol, the people who work there, and also making sure this never happens again."

The commission, which passed the House of Representatives, failed to win the 60-vote threshold needed to overcome a filibuster in the Senate, drawing just 54 "yes" votes against 35 "nos."

Republicans including Senate Minority Leader Mitch McConnell have argued that a commission into the riots would be a way for Democrats to smear the GOP and would not "uncover crucial new facts or promote healing."

Congressional Democrats have said for months they want to launch an independent, 9/11-style investigation into what happened in January, when a crowd forcibly broke into the Capitol complex after Trump, 74, urged his supporters to march on where Congress had assembled to certify the November presidential election results.

Five people, including a Capitol Police officer, ultimately died in the violence that ensued.

Days after the attempted insurrection, Trump was impeached for an unprecedented second time for "inciting" the riot. The former president was acquitted by the Senate, though seven Republicans voted to convict.

In a statement, Sen. Bill Cassidy — one of the six Republicans who voted in favor of the commission — said that a further inquiry into the Jan. 6 events would take place with or without the support of all those in his party.

Speaking to Todd, Comstock echoed Cassidy's statement and suggested most people "still don't understand how violent" the riots were.

"Officer Fanone was tased 12 times at the back of his neck ... he has traumatic brain injuries and ... almost died that day," Comstock said. "He suffered a heart attack, and people are still talking about these [attackers] were like tourists. We need to have that full story out. It's going to get out one way or the other."

Comstock is one of a number of prominent conservatives involved in "A Call for American Renewal," an effort to create a new national party in the wake of the Trump administration.

Speaking on CSPAN earlier this month, Comstock described it as a "center-right group of Republicans, former Republicans, and independents who don't want to be Democrats ... but want to restore" the party.

The move to create another party, she added, came in light of the riot at the Capitol and the "grip" Trump continues to hold on the GOP. 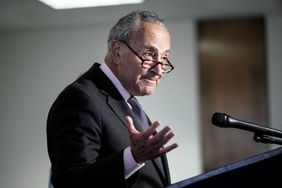