The former President and First Lady have been a power couple since they wed 29 years ago on Oct. 3, 1992

The former POTUS and FLOTUS first met in 1989, while they worked together at a Chicago-based law firm. Michelle, who was also a Harvard Law alumna, was assigned to be his mentor.

Michelle Obama (then Michelle Robinson) actually initially didn't want to date Barack because they were co-workers. Michelle told ABC News that after Barack asked her out, she thought, "no way. This is completely tacky." Luckily, she eventually agreed to a date when the future president offered to quit his job.

Their first date consisted of a long walk, the Chicago Art Institute and, of course, ice cream. Obama said in a 20th anniversary video. "I offered to buy her ice cream. And then bought her some chocolate ice cream. And I think that is what put her over the top. That's where she said, 'This guy knows how to treat a woman.' That was our first kiss!"

The pair have been #CoupleGoals ever since.

Michelle wrote of her husband and their wedding day on Instagram, "You can't tell it from this photo, but Barack woke up on our wedding day in October, 1992 with a nasty head cold. Somehow, by the time I met him at the altar, it had miraculously disappeared and we ended up dancing almost all night. Twenty five years later, we're still having fun, while also doing the hard work to build our partnership and support each other as individuals. I can't imagine going on this wild ride with anybody else."

Even senators need a hand every now and then! In 2004, Michelle fixed her husband's tie before he gave a keynote address in Chicago.

According to Michelle, "Barack didn't pledge riches, only a life that would be interesting. On that promise he delivered."

She's Got His Back

In 2008, when he was still just a presidential hopeful, a proud Michelle hugged her husband on the campaign trail.

These two even manage to make campaigning look fun!

The couple fist bumped in 2008 at a campaign rally after Barack became the official nominee for the Democratic party.

The pair had their first dance as President and First Lady when Barack Obama was inaugurated in 2009.

He Only Has Eyes for Her

After the 2009 Inaugural Ball, the Obamas look the elevator straight to Cloud Nine, and this photo is proof!

Needless to say, the pair rolled into their next eight years in style.

In 2009, Barack hugged his wife while in the Red Room of the White House — which is also where they gave their last interview to PEOPLE as POTUS and FLOTUS in 2016.

The pair danced together at their second Inaugural Ball in 2013, smiling like two kids in love.

Barack told Marie Claire in 2008 about his wife's best qualities.

"Anybody who knows her well knows she's got the best sense of humor of anyone you'd ever want to meet," he said of Michelle. "She's the most quintessentially American person I know ... She's just a wonderfully normal, levelheaded person. Any American woman who meets her would immediately identify her as a fellow traveler."

Even the leader of the free world needs a helping hand every now and then.

The Look of Love

Get someone who looks at you the way that Barack looks at Michelle.

Even as the President of the United States, Barack knows that his wife is always the star!

"There's no doubt I'm a better man having spent time with Michelle," he told Vogue in 2013, "I would never say that Michelle's a better woman, but I will say she's a little more patient."

Barack gave his wife a kiss as they left the White House in January 2017.

Gushing Over His Wife

"Michelle never asked to be first lady," Barack told Vogue in 2016. "Like a lot of political spouses, the role was thrust upon her. But I always knew she'd be incredible at it, and put her own unique stamp on the job. That's because who you see is who she is — the brilliant, funny, generous woman who, for whatever reason, agreed to marry me. I think people gravitate to her because they see themselves in her — a dedicated mom, a good friend, and someone who's not afraid to poke a little fun at herself from time to time."

Michelle said of her husband on their 28th anniversary, "I love @BarackObama for his smile, his character, and his compassion. So grateful to have him as a partner through everything life throws at us.

After leaving the White House, the pair went on a vacation to Joshua Tree, and "pushed" around this big boulder. Fitting, considering Barack has called Michelle his rock.

He told Oprah Winfrey in 2011, "Obviously I couldn't have done anything that I've done without Michelle. Not only has she been a great first lady, she is just my rock. I count on her in so many ways every single day."

Since leaving the White House, the pair have enjoyed their downtime.

Mrs. Obama "has been more relaxed and more joyful since we left office," her husband told PEOPLE. "That allowed us to just enjoy the deep love that comes with a marriage this long. But also to be friends again."

Though they've posted many great photos together in the years since leaving 1600 Pennsylvania, perhaps none broke the Internet as much as Michelle's shot of the pair rining in 2022 together.

"Happy New Year from me and my boo! 🎉🥳" she wrote. "Wishing you all a year filled with happiness, love, and good health." 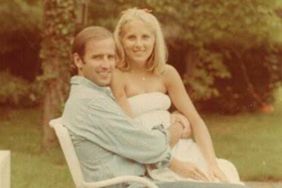 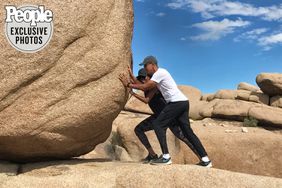 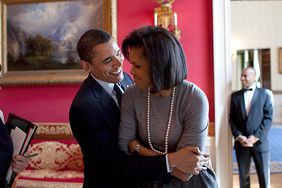 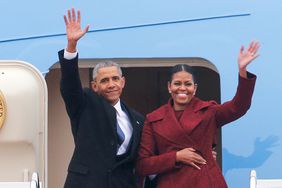 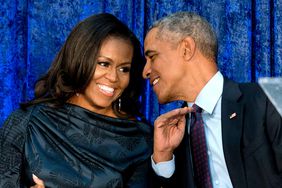