The 38-year-old comedian got in a few zingers at the crowd: "If you guys are all here, who's shopping at Men's Warehouse right now?"

Amy Schumer is known for her jokes — but she gave New York Gov. Andrew Cuomo a seriously heartfelt introduction at his birthday party-slash-fundraiser in New York City on Wednesday night.

A source at the event tells PEOPLE that Schumer did a standup routine before introducing the governor, who turns 62 on Friday.

About 300 supporters were at the event Wednesday night to celebrate Cuomo’s birthday and support his re-election campaign. Cuomo announced in May that he would seek re-election and a fourth term as New York’s governor in 2022.

“He has always made me personally feel very comfortable and had an open-door policy for the issues that are important to me,” Schumer told the crowd, according to the source. “And I’m proud to call myself a friend and a supporter and a constituent of Gov. Cuomo.”

In attendance on Wednesday were producer Jane Rosenthal, co-founder of the Tribeca Film Festival, publicist Ken Sunshine and various labor and business leaders.

Cuomo’s daughters Cara and Mariah were there along with his mom, Matilda Cuomo, the former New York first lady and widow of former Gov. Mario Cuomo.

The source says Cuomo had just returned from a solidarity trip to Puerto Rico over Thanksgiving with his three daughters.

Schumer was quick with a quip during her standup at Wednesday’s party, but she also struck an occasionally serious tone to wish governor Cuomo a happy birthday and express her support.

“I feel very aligned with him and his belief system. And so does my husband,” Schumer said, according to the source, before wrapping up her message with a joke. “We don’t care how the baby identifies, gay, straight, trans — as long as he does not identify as a DJ.”

The 38-year-old comedian still got in a few zingers at the crowd: “If you guys are all here, who’s shopping at Men’s Warehouse right now?”

Schumer introduced Cuomo, who went on to try and deliver some laughs himself, poking fun at his younger brother, CNN’s Chris Cuomo.

“When I was younger I was uncomfortable about it, but I’m a mama’s boy,” the governor told the crowd, according to the source. “My mother has five children. They’re all nice, but I am her favorite. I know that because she told me. She told me not to tell the others. I didn’t, expect one: I told my brother Chris just to make him feel bad about himself. It didn’t succeed, because nothing can make Chris feel bad about himself. But I told him anyway because sibling rivalry really never ends, you know, it just goes on and on and on.” 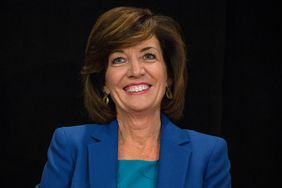 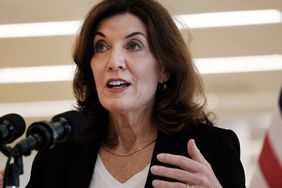 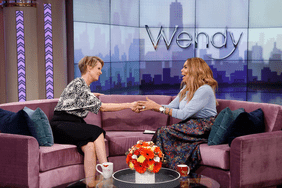 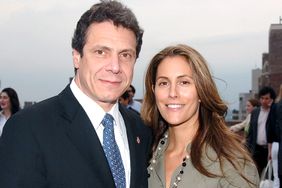