The Dress! The Dancing! Go Inside the Romantic Wedding for George H. W. Bush's Granddaughter Ashley

Nearly 100 years ago, in the original heyday of Laguna Gloria, it seemed no one of consequence could pass through Austin, Texas, without stopping there to attend a party.

The estate, the vision of businesswoman and philanthropist Clara Driscoll, spread out from an Italian-style villa in a series of terraces, lawns, landscaped and rustic gardens and winding paths leading toward Lake Austin on one side of the peninsular property and to an eponymous lagoon on the other.

Driscoll — heiress to ranching and real estate interests, fluent in three languages, a writer and world traveler and and onetime Broadway producer who played a central role in preserving the Alamo — deeded her property before her death to the state’s fine arts association.

At the time she reportedly wrote, “In the future, it will be used … to preserve the things that are beautiful in life.”

Laguna Gloria, with 14 acres of sprawling gardens and its historic villa, still stands some 103 years after its construction. On March 2, it played host to the wedding of the descendant of another notable Texas family: Ashley Bush, granddaughter of former President George H. W. Bush and niece of former President George W. Bush, wed Julian LeFevre.

“Beyond joyful for my beautiful and loving sister Ash & her new hubby Jules!” Lauren wrote in a celebratory Instagram post on Sunday. “It was an honor of a lifetime to get to officiate their ceremony yesterday. I love them to the moon and back, and wish them a very happy forever more.”

Laguna Gloria: Austin's Favorite Venue for Weddings and Events from The Contemporary Austin on Vimeo.

Go Inside the Wedding Venue

Laguna Gloria is “a little oasis on Lake Austin,” according to Nicole Chism Griffin, communications director for The Contemporary Austin, which owns the property.

Popular for weddings, receptions and other events, Laguna Gloria’s primary use now is artistic: The gardens are filled with contemporary sculpture, the villa hosts lectures and programs and, tucked away at another end, there is an art school.

Both the spring and fall are “usually filled with weddings,” Griffin tells PEOPLE.

Guests enter through a formal gate (“a replica of iron gates that used to be up at the capitol in downtown Austin”) to see an oval drive, with the Driscoll Villa at one end, Griffin says.

Surrounding the home are terraces and manicured lawns and gardens. Beyond that the property drops down to the lower grounds out toward the water. This area is more wooded, more rustic, more overgrown.

“You wander down paths and then you’re confronted by some really cool contemporary sculpture,” Griffin says.

Not so vast that one can get lost in it, the property nonetheless lends itself to a quiet moment alone. And then, of course, guests can return to the large entertaining spaces.

The villa itself was designed with this in mind, Griffin says: Instead of facing the road, to greet guests by car or carriage, it faces the lake. Many of its interior rooms are more windows than walls. The main ballroom opens directly, via French doors, to the terrace beyond — the water just past that and sky above.

(“Most of the activity,” Griffin notes, “happens out on the lawn.”)

Beyond the main home, Laguna Gloria has other historic features including a amphitheater carved from a hill that overlooks an inlet. It’s there were many guests are married, Griffin says. The property also has a “Temple of Love,” a small pavilion built by Driscoll on the lower grounds.

“The topography of the property sort of creates these separate areas which also keeps it from feeling sprawling,” Griffin says.

The Wedding Weekend, Big Day and Beyond

Ashley and LeFevre — who got engaged in December 2017 in Iceland, according to her mother — did not just throw themselves a Saturday wedding. They hosted a whole weekend for friends and family.

Guests — which included Jenna Bush Hager and Barbara Pierce Bush and their father and mother as well as La La Land director Damien Chazelle, per Page Six — were asked to “come dressed in Vintage Western attire.” Sisters Ashley and Lauren broke out their best fringe.

Businessman Fouad Said surprised Ashley with a gift of two sheep, each decked out in Swiss bells, according to Page Six.

On the morning before the ceremony, everyone gathered again for a game of “bubble soccer” at a local park — which is exactly what it sounds like. Or as Ashley and LeFevre described it on their wedding website: “sumo wrestling mixed with soccer.”

Somewhere in the there the couple found time to rehearse their vows (even if they were a little giggly), and Ashley and Lauren were joined by mom Sharon for a pre-wedding breakfast and manicure.

Singer Jon Batiste performed “What a Wonderful World” on piano, the couple’s “signature song,” according to Sharon.

For the reception, the bride switched into a Galvan London silk halter gown reminiscent of Meghan Markle’s Stella McCartney reception dress at her own wedding last year.

While Ashley and her husband told guests to “come ready to dance!” they didn’t keep it too loud. Given the noise curfew, Sharon posted on Instagram that they transitioned to a “silent disco” later in the evening, with guests all dancing while wearing the same neon-lit headphones.

According to Page Six, Amanda Hearst, her fiancé, Joachim Rønning, and venture capitalist Ken Howery were in attendance along with others.

Ashley and LeFevre wed a little more than year after he first popped the question while in Iceland during a romantic visit to the Blue Lagoon hot springs, Sharon told Page Six at the time.

“Jules had planned the trip as a surprise and had just told Ashley to bring warm clothes,” Sharon said. “We are all so happy and excited for them both.”

The couple, both Los Angeles filmmakers, work and write together and want to collaborate even more closely, they said on their wedding registry: “We want to film together!” 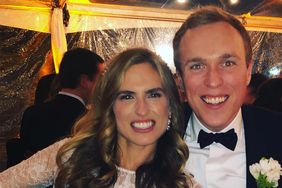