From Eva Mendes to Minka Kelly, these celebs always stay fashionable when out with their furballs

The Charlie’s Angels star stays stylish on a casual January afternoon in Beverly Hills with Chewie, stepping out in a peasant top, cutoff shorts and flawless makeup.

It’s a matchy-matchy day for Rossum and her Yorkie Cinnamon! The color-coordinated Shameless actress takes a fashionable stroll in Los Angeles wearing a geometric print and light brown blazer.

Handsome overload! and his best buddy take names on the New York City streets in July, the actor in a sharp jeans-and-sweater ensemble and George sporting a leather collar and leash.

The and her dog Maui are a couple of California cuties! Tisdale keeps it fresh with a pair of red-framed sunglasses and strands of gold necklaces while biking to Haylie Duff’s house in August.

Sporting slouchy boots and a bold graphic cardigan, the singer keeps an eye – and one hand – on both her pups in Miami in May.

Stepping out of her Catwoman suit and into an easy summer look, the adds a splash of color with her Lab Esmeralda’s red leash while out in Pittsburgh in August.

Wearing a strapless navy maxi dress and green sash, the mom-to-be looks beautiful as she watches Yorkiepoo Max frolic on a Malibu, Calif., beach in July

It may not be his dog – or his personal style – in real life, but the Gossip Girl dude gets an honorable mention for his bold blue duds on the show’s N.Y.C. set in August.

The looks every bit the fashionista in July as she takes her dachshund for a stroll in New York while clad in a crisp white shirt and textured navy skirt.

Looking chic is a walk in the park for CZJ, who sports a classic navy-and-white nautical look and bright red bag while roaming New York’s Central Park with pooch Figaro. 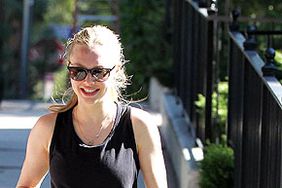 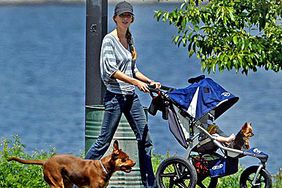 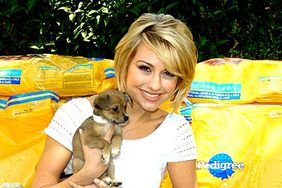 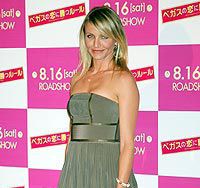 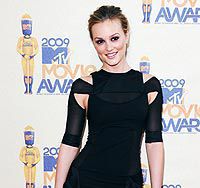 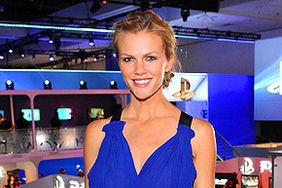