Meet Quimera the 'Two-Faced' Cat: The Most Rare and Beautiful Feline You've Ever Laid Eyes on

This rare feline, known as a Chimera, has an exotic and unique characteristic — each half of her face is a completely different color, including her eyes

Quimera the cat is like a character out of a Batman comic: one part Catwoman, two parts Two-Face.

According to geneticists, a true chimera is quite the anomaly. As Columbia University Professor of Genetics and Development Virginia Papaioannou explained to New Republic, “A chimera … is a composite individual that was made up of cells from at least two different original embryos. If they fuse together early enough, they will become a single organism whose genetic input is from two completely different individuals. In a mosaic, there’s only one individual and it just happens to have different genetic components active in its cells. A chimera would be a much more unusual and unlikely event.”

Papaioannou believes that cats like Quimera, and her similarly stunning predecessor Venus, are merely striking examples of calico cats.

“It’s a fairly straightforward example of X-inactivation mosaicism, with the addition of a white spotting gene. All female mammals have two X-chromosomes,” explained the professor. “In a cat, one gene for fur color is located on the X chromosome. And in any female, expression of all the genes that are on the X chromosome will be ‘mosaic’ —that is, half of them will express one version of the gene (e.g., black fur) and half will express the other version of the gene (e.g., orange fur). The inactivation is random. Here we are talking about the orange/black mosaicism, which is highly visible, but the same pattern will hold true for other genes on the X that have two different versions — or alleles.”

Okay, smarty. Then what’s the explanation behind her different colored eyes?

Wow. That’s a lot of science to explain such an adorable creature like Quimera, who, for the record, probably has no idea how unusual she is. But her fans are fully aware: This gorgeous cat’s Instagram fanbase is 33.8K followers and growing.

Still, you won’t catch Quimera with a chip on her furry shoulder: In all other ways, she’s a normal feline who loves to snuggle up with her human, hide under bed sheets and paw around the computer.

Next on Keeping Up with Quimera? Meet her gorgeous girlfriend Penny Miau! And don’t forget to follow Quimera on Instagram at @Gataquimera. 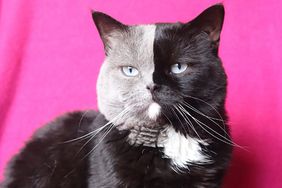 Cat Dad with Handsome Two-Toned Face Fathers Two Kittens, One for Each Side of His Head 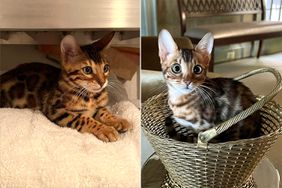 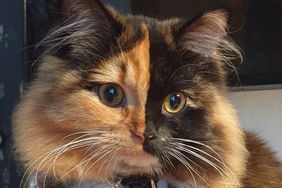 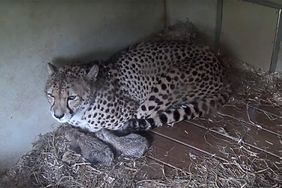