A tourist recently learned the hard way that being a neigh-sayer will only stirrup trouble!

While enjoying a day at Assateague Island beach, located off the coast of Maryland, an older man in a Speedo decided he would attempt to pet a wild horse that was roaming the area, despite signs that advised against doing so.

In dramatic footage captured by another beachgoer, the man’s day quickly turned sour when he reached out for the horse’s backside and was suddenly kicked in the groin.

From the forcible kick, the tourist was knocked over into the sand, prompting a number of shocked bystanders to rush to his aid.

The horse, meanwhile, paused for a moment before continuing on its way as if nothing had happened.

Assateague’s wild horses have freely inhabited the Maryland island for centuries, according to the National Park Service.

Historians believe the animals’ ancestors were brought to the barrier island in the late 1600s by mainland owners “to avoid fencing laws and taxation of livestock.” Local folklore also believes the Assateague horses may have been survivors of a shipwreck off the Virginia coast.

Though they were likely descendants of domestic animals, the horses have since reverted to a wild state, according to the National Park Service.

While they may appear friendly and innocent, park officials note on their website that feeding and petting the horses is illegal and that doing so can result in dangerous consequences, such as getting bitten, kicked, knocked down or stepped on.

“Enjoy their beauty from a distance, and you can help make sure these extraordinary wild horses will continue to thrive on Assateague Island,” officials write on the website.

In the weeks since the incident, the man has not been identified.

A rep at Assateague’s National Park Service tells PEOPLE that they are unable to confirm whether it was at the State Park or National Park, but notes that they do not plan on taking legal action (despite the fact that petting their horses is illegal) and warns visitors to be mindful of their surroundings while visiting their park.

“The human/horse interaction that was captured on camera is a stark reminder of the power and unpredictability of wild horses,” the rep says. “These types of interactions can happen in an instant.” 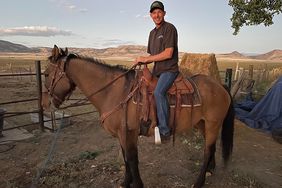 Utah Horse Who Ran Away with Wild Mustangs Returns Home After 8 Years: 'A Dream Come True' 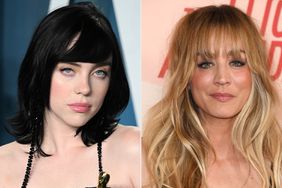 Billie Eilish and Kaley Cuoco Among Stars to Sign Letter to End Horse-Drawn Carriages in N.Y.C. 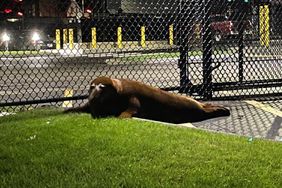 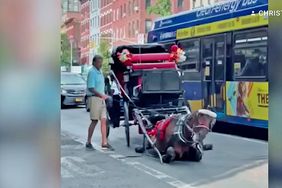 Carriage Horse Collapses in New York City Street as Its Driver Yells 'Get Up!' 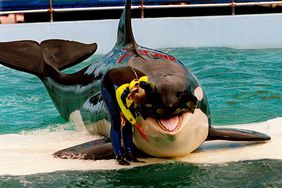 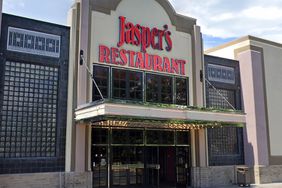 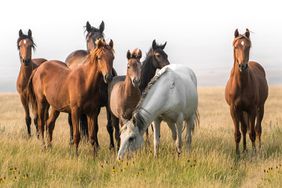 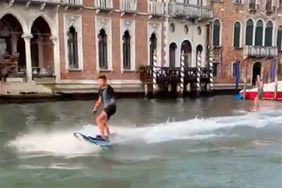