The Spelling-McDermotts cuddle some pups in N.Y.C. Plus: Sharon Osbourne's Big Apple Bella and more

He likes you! Spelling and husband Dean McDermott take a licking – or maybe a nibbling! – from two puppies Wednesday at a Cottonelle promotional event in New York City.

After stopping by the Today show together on Monday, Osbourne and pooch Bella continue their New York City adventures, stepping out in Midtown on Wednesday.

Though her comedy has been canceled, Ferrera keeps spirits up on Wednesday by walking pooch Buddy through Ugly Betty’s New York City set.

Close has her hands full with not one but two pups – her beloved Bill and Jake – on the New York City set of Damages on Wednesday. Last year, the actress told PEOPLE that her dogs love coming to work – and even sneak into scenes!

Butler keeps a watchful eye over his main squeeze – adorable pug Lolita – while out for a walk in Los Angeles on Monday.

After her appearance on the Hope For Haiti Now telethon Friday night, Roberts reemerges in Malibu on Monday to walk her plus-sized pups.

No vampires here! True Blood star Moyer mulls over a script in Venice, Calif., on Monday while sitting on the sidelines of a local dog park.

It’s a snugglefest! Cyrus keeps her new four-legged friend, named Mate, close during a shopping trip to Maxfield in West Hollywood on Sunday. The 9-week-old shepherd puppy was a gift from the singer’s parents.

Gotcha! The Grey’s Anatomy hunk and expectant wife Rebecca Gayheart are caught in the act of dog walking on Saturday, outside their Los Angeles home.

Barton and Shih-Pom Ziggy grab a coffee to go while out in New York City on Sunday. 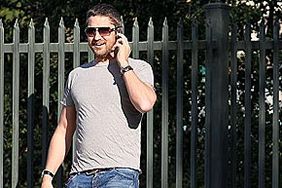 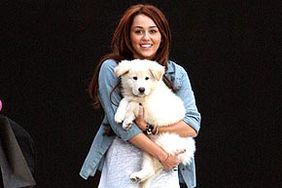 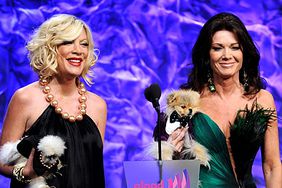 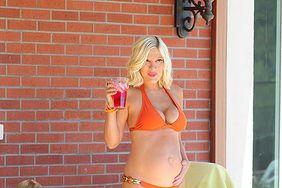 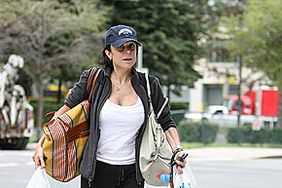 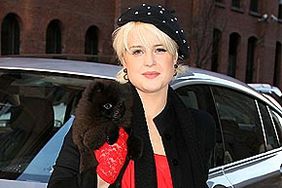 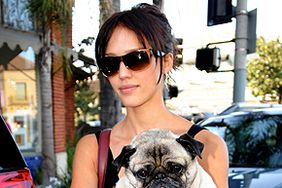 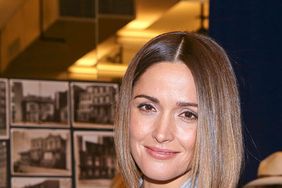