Rossum makes puppy-dog eyes at her pooch inside LAX. Plus: Dean McDermott keeps a firm hold on his pet goat in Sherman Oaks, Calif.

With Tori Spelling tending to pet chicken Coco, McDermott mans the family’s goat during a day out with kids Liam and Stella (not pictured) Monday in Sherman Oaks, Calif.

The singer spends some one-on-one time with her furry friend while out and about in New York Monday.

Schwimmer and celebrity partner Mike Catherwood (not pictured) trade dance practice for some doggie-time at the Dancing with the Stars studios in L.A. Thursday.

How much is that doggie in the driveway? The Black Eyed Peas songstress eyes a new furry friend after running in husband Josh Duhamel’s Tokidoki Relief Run to benefit Japan Sunday in Santa Monica, Calif.

C’mon Winston, keep up! Jonas leads the way for his canine companion Sunday in Beverly Hills.

Another day, another walk with Whiz! The expectant actress makes sure to pick up after her pup Saturday while out in New York.

Looks like a love of animals runs in the family! The legendary actor keeps company with his pet pooch Friday while lounging outdoors at his Beverly Hills home. 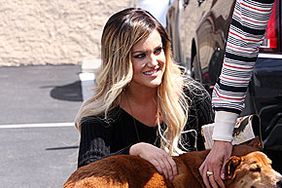