Spotted: Nicky Hilton Cozies Up to a Koala

Nicky Hilton went from the catwalk to walking among wildlife during her visit Down Under. The designer, who was in Sydney to model during Australian Fashion Week, visited with a curled-up koala on Wednesday at the Taronga Zoo.

She wanted to get even closer to the fluffy marsupial, but Tweeted that she wasn’t allowed to cuddle it. “I was just informed [it’s] illegal to hold a koala in New South Wales. You can only pet them,” she wrote. No exceptions – not even for heiresses!

Hilton did get to see more wildlife in action, and posted a photo of a baby koala being cradled by its mother. The socialite – who’s used to being pursued by paparazzi – even spent some time chasing after a jumpy baby wallaby. 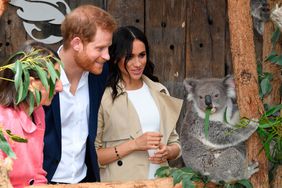