Selena Gomez’s dogs may be from all different places, but they have one thing in common: All five are rescues, brought in from the shelter, the parking lot and even on location from a movie shoot in Puerto Rico.

The singer and actress was raised to adopt. “In Texas, where we’re from, there are a lot of dogs that needs homes,” Gomez tells PEOPLEPets.com. “It just never made sense to any of us not to get a shelter dog, since there are so many that need homes.”

The five pooches that found their way into the Gomez household each have a unique story.

There’s Wallace, the 8-year-old boxer-shepherd mix. He came from a shelter, but had parvo and was very sick when he first was adopted. Now, he’s the “smart and athletic” one in the pack, and is always first to play fetch with the tennis ball.

There’s Fina, the 7–year-old Rhodesian ridgeback mix. She walked up to Gomez’s mother in a parking lot. “She was skin and bones, full of fleas and ticks, and had mange,” Gomez says. “We took her to the vet and fixed her up.” No longer covered in bugs, and now well-fed, Fina is the house diva who won’t go to bed unless her blanket and pillow are there first.

Chip, a 7-year-old corgi mix, is Gomez’s special little guy, and came from a rescue organization. “Chip is a lover,” Gomez says. “He just wants to be loved. It doesn’t matter who you are.”

Labrador-retriver mix Willie (pictured) was left behind when a neighbor moved. When he got loose, Gomez’s stepfather Brian Teefey took him to a nearby shelter. “They called 10 days later and said they were going to euthanize him,” Gomez says, “so we took him home.” He is the biggest of all five dogs, and keeps to himself, but Gomez says Willie, now 5, is “the most gentle and lovable.”

Chazz, who’s the youngest of the bunch at 2, is a mysterious “Puerto Rican breed,” according to Gomez. She was in Puerto Rico shooting the Wizards of Waverly Place movie, when she came upon Chazz, sitting alone in a field at one of the film’s remote locations.

“He became the set dog for two weeks while we finished the movie,” Gomez says. “We had to sneak him in and out of the hotel three to four times a day to go to the bathroom.”

As a group, the Gomez Five are all friends and run around together – for the most part, playing with tennis balls. The entire family (humans, too) love to play tennis, and the dogs especially like to chase the balls around. Life on the court is a far cry from what each dog once knew, but thanks to Gomez and her family, they won’t have to know anything different again.

For personal photos of Selena Gomez’s dogs, check out our photo gallery on PEOPLEPets.com. 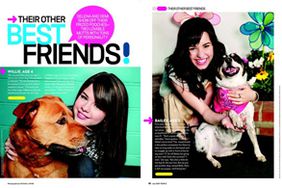 Their Other Best Friends! 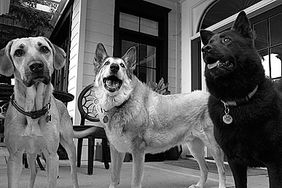 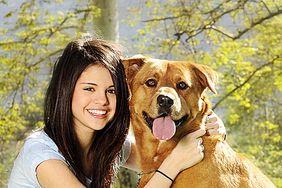 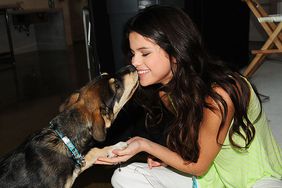