You sent in dozens of pictures of your happy, goofy dogs. We picked out our favorites – the pups with brightest, toothiest grins. Log in to rate them!

Lynda Searcy (annabelle) of Arizona says: “This was taken a couple months after we saved Annabelle from the pound. Annabelle is truly a happy, loving, gentle, ……etc. Dog and loved by us more than any dog should be loved.”

Tamyra Althof (tkayaz) says: “This is Wynonna, a rescued Greyhound mix. She has a blue eye and a brown eye. I don’t even remember when or why we took the picture, but this is the greatest doggie smile ever!”

Kevin Ramberac (cinnamon) says: “This is my dog Cinnamon laying in bed smiling away.”

Terri-Lynn Hurley (parker623) of Florida, Mass., says: “Parker was about 12 weeks old and he was playing in a big dirt pile. I called his name and he looked at me and smiled.”

Danielle Luis (adoremycuties) of New York City says: “I always catch Chanel smiling when I take pictures of her,but her signature smile is always with her eyes closed. I think here she is laughing and thinking…oh mom you know you do not fit in my dress.”

Lucia Rupert (drlulittle) says: “We were out side and Crosby rolled over in the grass and started rolling around so I went over and rubbed his belly and he started smiling so I took a picture.”

Tinkerbell has a bad habit of chewing clothes–and just about everything. Beth Silver (silvercloud) of Charlotte, N.C. says: “To keep from getting in trouble, Tink thinks all she has to do is smile!”

Jordanny Albino (dany15) of Lancaster, Pa. says: “Well, I told Max to lie down and he did. So I picked the camera and shot a picture and I saw that he wincked, so he’s a natural.”

Enid Suarez (suarezenid) says: “Tommie is just being himself and posing for the camera.”

Jessica Buchta (jessieb84) of Wesley Chapel, Fla. says: “We took this at our apartment in Florida. Our dog, Bear, is on the left, and is hanging out with his girlfriend, Sunny. Both dogs are happy as can be and Sunny’s giving a little wink for the camera. Too cute!”

Lori Cicchini (lori1219) says: “Zeusi was out chilling with his friends and was just enjoying life.”

Courtney Wallace (madhunt5302) says: “This was one of her first car rides and she was so nervous!”

Tamra LeMay (lablover1) of Fort Worth, Tex. says: “Nemo is all about the tennis balls. He plays with two at a time. He also loves playing with his kttty Snuggles.”

Traci Hettler (traci2421) says: “It was the first day we brought him home after adopting him. We just got home and he was playing in the backyard showing off for us and the camera.”

Mieko Takahashi (miekotshull) says: “Kumo, which means “clouds” in Japanese, just had the best time zooming (not running, zooming) around my friends’ back yard on a sunny hot day.”

QBA Kolston (thisis4jaime) says this was on Christmas Eve: “I was about to give him one of his christmas TREATS.”

Cindy Rossit (sailorswife) says: “This is a photo of my 7-year-old daughter Krysta’s service dog named Ben. It was taken at my in-law’s cottage in Bolsover, Ontario. Ben LOVES getting his photo taken and is always smiling for the camera. What a handsome boy!”

Jen Szychter (Jens125) of Philadelphia says: “Java’s first day at our house–as excited as could be!”

Penny Krome (bpkrome) of Edwardsville, Ill. says: “She smiled for the professional photographer in a family picture!”

Marie Van Meter (winniemom) of Marion, Ohio says: “I took this picture when Winnie was coming into the kitchen.”

Jessica Miller (deacon4me) sums it up: “And they say dogs can’t smile…” 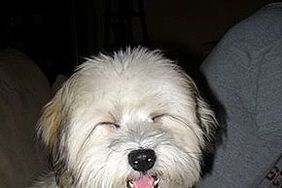 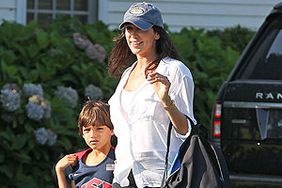 Lauren Silverman Steps Out with Baby Bump and a Smile 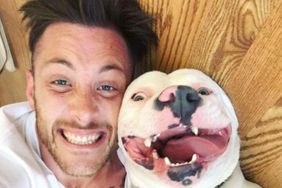 Diggy the Smiling Dog Will Stay with His Michigan Owner 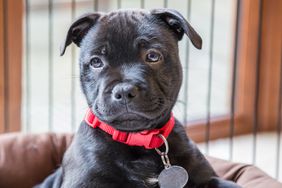 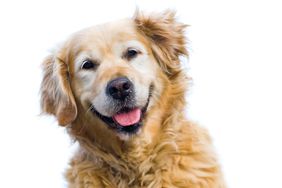 PHOTO: It's Friday! And We're Smiling Like this Dog After Surgery

Check Out the Cat Pic That Is Boggling the Internet (PHOTO)