From movie sets to city streets, the actor and his mutt George are inseparable

may act opposite Hollywood’s hottest starlets, but his real-life costar is George, his loyal companion of many years. By now, George is famous in his own right, getting a special portrait session with photographer Hama Sanders. “This is my handsome friend George and some actor,” Sanders says.

Following their recent move to New York City, Gosling and George enjoy an al fresco lunch and do some sight-seeing in July.

SOCK IT TO ME

During a promotional stop for Crazy, Stupid, Love in July, the star brings George along to Late Night with Jimmy Fallon. The pooch’s red sock covers the hot spot on his foot.

Excess baggage? As if! The duo have been together for more than 10 years, and it shows. Gosling easily picks up his not-exactly-small dog for an escalator ride at Los Angeles International Airport in June.

By now, George is a pro at going through security at the airport and even smiles through the checkpoint.

Budding filmmaker Gosling makes George his star during a walk through Hollywood in 2008.

In the spring, George joins Gosling on the set of The Ides of March. Despite a long day of filming, Gosling helps George ring in St. Patrick’s Day with a festive green shirt.

During a hike in Los Angeles in 2010, the BFFs take a break for a little game of fetch.

Even a dog could use a massage sometimes! Gosling gives his loyal friend a therapeutic touch in 2008 – looks like it worked!

George has worn his fur in a Mohawk for a decade. “Ten years ago I shaved a Mohawk just for the summer,” Gosling says. “And then, every time it started to grow out, he turned into a total jerk. And then, I’d shave it back and he’d turn into a nice guy again.”

APPLE OF HIS EYE

Gosling, filming The Ides of March in Michigan in the spring, describes George as being “more interesting than I am.” During a Late Night with Jimmy Fallon appearance months later, he feeds the pup apple pieces that he bites off himself.

During a sweater-weather day in Ohio this March, Gosling gets a grip on his buddy.

After lunch with Gosling and his sister in 2008, George decides to stay an extra minute in the shade – that California sun gets hot! 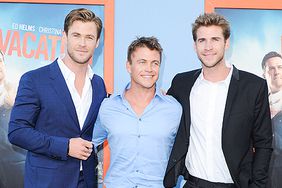 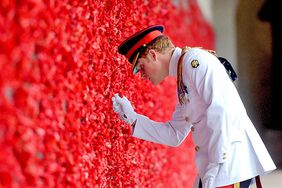