Selena Gomez Can Have Justin Bieber, We're All About Rescue Animal Justin Beaver

Second Chances Wildlife Center in Louisville, Kentucky, is home to a superstar.

Justin Beaver is quickly becoming the most famous resident at the animal rescue.

The center’s director and environmental educator, Brigette Brouillard, is currently looking after the rescue beaver, who came to Second Chances after another rehabber became too overwhelmed by the orphaned beaver’s high maintenance needs.

While Justin Beaver or JB is cute, Brouillard agrees he does require a lot of time and money. Usually the center would care for JB until he was healthy enough to be back in the wild, but, because he was orphaned at a young age, JB is now a permanent resident at Second Chances.

“Our goal is to normally release animals back into the wild once they are old enough, healthy enough, and understand their survival skills. Beavers stay with their natural families for at least two years. Since beaver families are so close-knit and bond very tightly, we simply can not just release one beaver,” Brouillard told PEOPLE.

Like his namesake, this beaver loves to go on tour and greet eager crowds of fans.

“He goes to schools, parks, Scouts, and libraries to teach people about the importance of wildlife and living humanely with them,” the Second Chances director said of JB’s “important job.”

As payment for his work, and to make sure the animal stays comfortable in his forever home, the center is raising money to build the cutie his own outdoor enclosure, perfect for a growing beaver.

“JB came to me just shy of eight pounds. He is currently 20 and I expect him to get to 50 or 60,” Brouillard explained.

Until his home is complete, JB is enjoying his trips outside and spends his time inside “chewing dry wall, baseboards, framing, and doors.”

Aside from gnawing wood, JB also enjoys chomping on “sweet potatoes, kale, apples, pears” and “leaves when in season.” 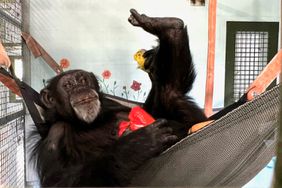 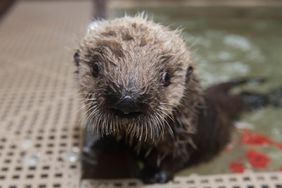 Meet Cinder the Sweet, Thriving Sea Otter Pup Who Was Found Orphaned and Near Death