Little Lupo went to a royal polo game in the Gloucestershire countryside Sunday – and got a cuddle and more from Prince William.

It was Kate who’d brought the couple’s black cocker spaniel to the outing, just hours after she’d spent time with inner-city kids on a camping trip in Kent.

“In true spaniel fashion he was very playful,” an observer tells PEOPLE.

And while he got some exercise by dashing around the sidelines with Kate, Lupo also got to rest his legs when he was embraced in the arms of William, – who planted a princely kiss on the pooch, to boot.

William and brother Prince Harry played on opposing sides at the Beaufort Polo Club, about 100 miles west of London, all to raise money for some of their charities.

Lupo wasn’t the only one getting attention. Kate used the occasion to catch up with royal cousins-in-law and play with the Queen’s great granddaughter, Savannah Phillips, the 18-month-old daughter of Peter Phillips and his wife Autumn.

“Kate was really getting into playing with Savannah,” said the observer. “She seemed to be trying to get Savannah to stroke Lupo.”

William and Harry’s first cousin, Zara Phillips, and her husband, Mike Tindall, were also among the throng of royals who enjoyed a weekend of festivities to mark the Queen’s official birthday celebration.

At the end of the match, William carried Lupo off the field and into a tent. PHOTOS: Lupo’s Royally Awesome Life 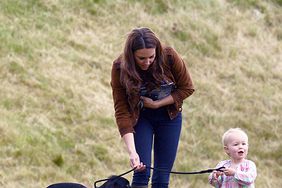