The new discovery+ series focuses on the Baleros and the Rihns, two families competing to be the best pig showers in Texas

Everything is bigger in Texas, including the state's appreciation for pigs.

Pig Royalty, a new original series from discovery+, gets in the mud with Texas's show pigs and the eccentric families that love them.

PEOPLE has an exclusive sneak peek at the new series, which premieres on the streaming service on March 23, so animal lovers can get a taste of what to expect.

"Pig people are very different," the above sneak peek warns.

Pig people aren't afraid to get a little dirty to earn the top spot and big money, which means Pig Royalty's viewers should prepare for plenty of rumors and drama. And because the show takes place in the Lone Star State, there is big hair, big glam, and big personalities.

The show follows the Baleros and the Rihns, two well-decorated families in the world of Texas show pigs that are continually striving to best each other in the ring.

The Baleros, a family team that includes three sisters known as "the hog queens," see themselves as the pig world's royal family, but the Rihns are right on their hooves and are ready for a changing of the guard.

To watch all the drama unfold — and learn quite a bit about show pigs — tune in to Pig Royalty when it premieres on discovery+ on March 23. 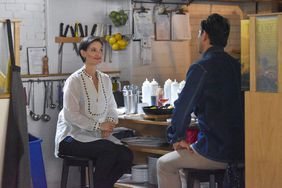