The manatee pair, who were moved from Florida after their mom died, are inseparable

It is a Saturday afternoon at the Columbus Zoo and Aquarium in Ohio. Outside, it may be the deep of winter, but inside the Manatee Coast exhibit, it's almost balmy. Five Florida manatees, and a host of other marine creatures, are relaxing in their 220,000 gallon, 76-degree glass tank, while a gathering of their human counterparts looks on, entranced.

"Look at the babies," a delighted mother implores her children. Indeed, the brightest stars of this underwater menagerie are a pair of twin manatee calves dubbed Millennium and Falcon. They are sizable babies to be sure – 211 and 207 pounds respectively – but at almost nine months of age, babies nonetheless.

The steel-gray, torpedo-shaped siblings were dramatically rescued last fall in the Florida Keys after their mother Bonnie was killed by a boat strike.

Since their arrival in November, Millennium and Falcon have become the darlings of the zoo, winning hearts and drawing crowds. Nor does it hurt that their monikers are inspired by Hans Solo's Star Wars spacecraft. "Because they're twins they are always together," says Becky Ellsworth, the curator who oversees their care. "They're sleeping together. They're eating together. They're going up for breaths of air together. It's really been fun to see."

The duo's poolmates include older orphans Jedi and Junebug, who joined them in their transfer from Florida, and longtime denizen Stubby, a maternal adult female, who is charged with teaching them all things manatee.

The youngsters are a main attraction at the zoo, one of only two organizations outside of Florida to participate in a partnership that rescues and rehabilitates manatees.

Visitor Amy Walton, 29, who works in information technology at a Columbus hospital, comes most weekends to photograph the manatees, and other animals, and to take in their calming manner. Early on, Millennium and Falcon were inseparable, she recalls. "But now it's like they're so aware of each other that they're comfortable enough to break off," Walton says. "You might have one clear on that end and one down here, but they'll always come back together."

There is more to the twins, however, than their stuffed-toy cuteness and endearing mutual devotion. Many, in fact, consider them tandem rays of hope for a species in peril.

Fatal boat strikes like the one that killed Bonnie, and another that broke her back a couple weeks earlier, reached a new high of 104 last year. With the Florida manatee's population growing – a record 6,250 were counted in 2016 – federal authorities have recommended that the marine mammal be demoted from endangered to threatened. Yet many oppose such a change, arguing that reckless boaters, development, entanglement in fishing line, and toxic algae continue to be extinction-level threats.

Manatee twins, in particular, are rare. Seldom, if ever, have twins been documented as well as Millennium and Falcon, from their birth in the wild and to their youth in captivity.

Around Key Largo, their mother Bonnie, 2,000 pounds and in her early twenties when she died, was a familiar figure to the scientific and local communities. She was notorious for becoming ensnared in discarded fishing line, rope, and other human debris, and suffered severe injuries because of it.

Kit Curtin, a contract marine biologist, says that before the twins, Bonnie had two single-calf births and also took on the care of an orphan manatee. "Because Bonnie became entangled so frequently we had to go in the water and work with her a lot to try to get the lines off, so she got to know my voice and would come over when she saw me," says Curtin.

Researchers were beaming when they learned Bonnie had given birth to twins in May. But it all turned to heartbreak that night in October when state wildlife authorities received a hotline call reporting a manatee carcass — Bonnie, it turned out — in the water near the community of Tavernier.

"I sobbed openly for about 10 minutes," Curtin recalls. "We don't usually get caught that way, but it really hit me hard. Just because she struggled and raised her babies for so many years and did so well through all her tragedies, and then in the end to be struck by a boat and have her skull cracked open, it's very sad."

Armando "Mandy" Rodriguez, founder of the Dolphin Research Center, a marine mammal group in the Keys, was also devastated. "This was a useless, nonsense death that I can't even go and yell at somebody about because of course nobody is going to own up to it," he says.

Quickly, though, everyone's concern turned to the twins, who fortunately refused to leave their mother's side. The next morning, the Florida Fish and Wildlife Conservation Commission (FWC) and Dolphin Research Center launched the rescue. Dozens of area residents, most of whom knew Bonnie, showed up as well, shouting their sightings of the elusive manatees from land.

Leaning out of their boat with a hoop net, rescuers scooped up the male fairly quickly, but his sister took evasive action. "After we got Millennium, Falcon kind of took off," says Amber Howell, a marine biologist with the FWC. "We were able to keep up with her, but every time we tried to get close with the boat she would dive away from us."

They finally caught, her, however, and soon she was in a portable pool with her brother. "It was just an amazing thing when they got together in the truck," says Mandy Rodriguez. "It was like, 'Ah, you're here, thank goodness.' I know I'm being anthropomorphic here, but it was a sense of relief for them that they were back together."

Millennium and Falcon stayed at the Miami Seaquarium for about a month. Their new playmates, Jedi and Junebug, were already slated to go to Columbus, and because they all got along so well, the staff wanted to keep the four together.

Shortly after the twins arrived at the Ohio zoo, however, their keepers grew worried. When Millennium and Falcon slept, they noticed, the pair would float at the surface, nose to nose, their little flippers touching. Was something wrong? Were they ill? As it turned out, they most likely were using one another as a security blanket. "That's how they felt safe," says curator Ellsworth.

Millennium and Falcon have gained close to 90 pounds each since their rescue. Entering the tank to clean, staff members can often hear all the young manatees noisily clicking, chirping, and whistling, especially in the morning, excited to start their day.

In two years, the twins will return to Florida. Upon their release in the Keys, they will be wearing satellite tags, advancing science and allowing even their most distant admirers to follow their journeys in real time.

Anxious to welcome them back are their mother's loyal human friends, who vow to be on hand for their release with both smiles and tears. "Are you kidding?" asks rescuer Mandy Rodriguez. "I wouldn't miss it for the world." 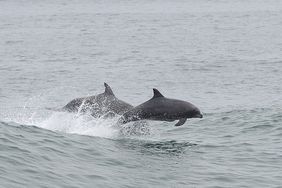