The GPS device, attached to one of the giraffe's horns, records the animal's location each hour so rangers can monitor its movement and keep it safe from poachers

The world's only known living white giraffe has been fitted with a GPS tracker to protect it from poachers in southeast Kenya.

The 15-foot tall male giraffe is currently alone in Ishaqbini Hirola Conservancy in Ijara, Garissa County, after two other white giraffes in the conservancy, a female and her calf, were killed by poachers earlier this year, the conservancy said in a statement.

Due to the giraffe suffering from leucism — a rare condition that causes partial loss of pigmentation in its skin — he is a prime target for dangerous poachers.

The tracking device, attached to one of the giraffe's horns, records the giraffe’s location each hour so rangers can monitor its movement and keep it safe. If the giraffe nears a dangerous area, rangers will intercept it and gently redirect it toward safer areas.

"The giraffe's grazing range has been blessed with good rains in the recent past and the abundant vegetation bodes well for the future of the white male," said Ahmed Noor, manager of the Ishaqbini Hirola Community Conservancy.

Rare White Giraffe Killed by Poachers Before Her Calf Dies of Starvation: 'A Very Sad Day

The use of the tracking device was requested to the Kenya Wildlife Service (KWS) by the board of Ishaqbini Community Conservancy, with support from the Northern Rangelands Trust and Save Giraffes Now.

"Our focus is to save giraffes from extinction, in part by being nimble enough to take quick, impactful action when needed," said David O’Connor, president of Save Giraffes Now. "That was necessary in this case, for sure. Now ranger teams, with help from community members, can track the bull’s movements, and respond immediately if he’s heading toward known poaching areas or other dangers."

The rare white giraffes were first discovered in 2017 after a villager living adjacent to the conservatory reported its sighting to a ranger.

"Nature is always stunning and continues to surprise humanity! These rare snow-white giraffes shocked many locals including myself but these gave us renewed energy to protect and save our unique wildlife," Dr. Abdullahi Ali, the Hirola Conservation Programme's director and founder, said at the time. "I am positive these rare giraffes will change the perception of outsiders regarding northeastern Kenya in which many people have negative perceptions."

According to the Africa Wildlife Foundation, about 40% of the giraffe population has disappeared in the last 30 years. The total population today is estimated to be around 68,000. 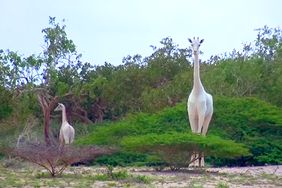 Rare White Giraffe Killed by Poachers Before Her Calf Dies of Starvation: 'A Very Sad Day' 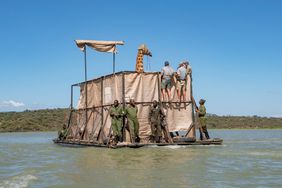 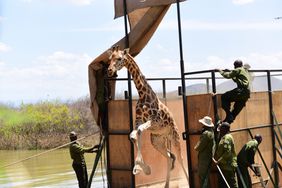 Vanishing Breeds Worry Prince Philip, but Not as Much as Overpopulation 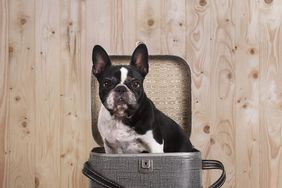