After a heart-wrenching ordeal at Michael Vick's Bad Newz Kennels, the pit bulls that were saved have brought joy to the lives of many families. Sports Illustrated's new cover story gives us a touching update.

In Sports Illustrated’s new issue writer Jim Gorant profiles the lives of many of the dogs that were saved from Michael Vick’s Bad Newz Kennels in 2007. Teddles, formerly one of Vick’s dogs, revels in his new life with owner Cindy Houser.

When she was seized from Michael Vick’s compound, Jasmine was so frightened that shelter workers constructed a little tent inside her cage so she could hide. “Jasmine’s happy, but she’ll never be like other dogs,” her owner Catalina Stirling told Sports Illustrated’s Jim Gorant.

When animal organizations suggested the Vick dogs be put down, Donna Reynolds, the executive director and cofounder of BAD RAP (Bay Area Doglovers Responsible About Pit bulls), and her husband, Tim Racer, sent a proposal suggesting each dog deserved an evaluation to see if they could be spared. They are now searching for a forever home for Grace.

Linda Chwistek and her husband Bill Cook have adopted Audie. “Of all dogs,” said Dr. Frank McMillan, the director of well-being studies at Best Friends Animal Society in Utah where some of the dogs live, “pit bulls possess the single greatest ability to bond with people.”

Sweet Pea, seen here with her owner Michael Wilson, is believed to be Jasmine’s mother. She has a physical reminder of her time at Vick’s compound: scars on her snout and head indicative of combat. Still, Gorant writes, Sweet Pea loves to be around other dogs.

Zippy now lives with the Hernandez family in Northern California. Mom Berenice (top left) has always stood up for the breed, which many people think of as dangerous. “These girls have grown up with pit bulls their whole lives, and they’ve loved every one of them,” she tells Sports Illustrated.

Uba now lives with his adoptive mom Letti De Little – and a cat named William. When a team was gathered to evaluate the dogs that had been seized, they were surprised at the dog’s behaviors. No more than a dozen were seasoned fighters, and few showed a desire to harm anything, Gorant writes.

The Vick dogs have made tremendous progress. Many of them cowered in the corners of their kennels after they were rescued, Gorant writes in Sports Illustrated. Frodo, named for the hobbit, now lives with Kim Ramirez who may end up keeping him for life.

Twenty-two of Vick’s dogs live at Best Friends in Utah. Many of the Vick dogs are in foster care, like Ernie who now lives in the Bay Area with Andy and Sasha Gibbs.

Jonny’s owner, Cris Cohen, enrolled the pit bull in training for Paws for Tales, a program where kids who get nervous reading aloud in class can practice their skills by reading to a canine audience of one. Jonny, who volunteers his ears once a month, listens carefully to Calvin Differding.

Read more about the Vick dogs and their incredible journey in the new issue of Sports Illustrated. 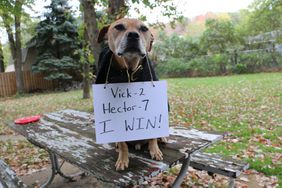 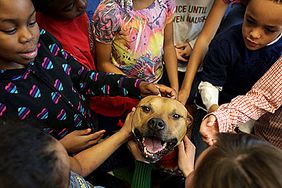 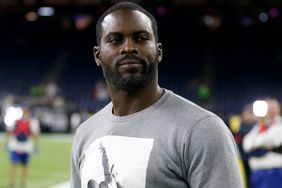