Aniston? Wilson? Nah. The one who really steals the movie is a rambunctious lab named Clyde.

Would you believe there’s a dog almost as naughty as the real yellow Lab Marley who is immortalized in John Grogan’s best-selling book Marley & Me? His name is Clyde and he is the star dog with the most screen time in the new Marley & Me movie starring Jennifer Aniston and Owen Wilson that hits theaters on Christmas day.

PEOPLE spent time with the 3-year-old pooch (right), who his trainer Mark Forbes describes as a “natural” on screen and the “antithesis of a diva” on set, and asked him our burning questions (with a little help from Forbes, of course!).

A: “Food of any type. We used beef, chicken, liver treats, ham … But literally his No. 1 thing that he loves is food. And he will eat anything, whether it’s people food, dog food – as long as there’s lots of it, he’s happy.”

A: Ham-flavored baby food. “[Jen and Owen] would put baby food on their cheek so he’d give them a kiss,” says Forbes. “Usually ham because it’s more skin-tone. Ham and turkey are the best color for it. They would put it on their faces – in small amounts!”

Q: Do you have a favorite scene in the film?

A: “The necklace scene. We’d taught him to bow and to hold the necklace in his mouth, and then at a certain point when they jump to grab it, he just gets to run around the house. We stuck three different trainers in different nooks and crannies around the house and we all started calling him. He just started running from one to the other – and then he realized he wasn’t getting any treats so he just started to run.”

Q: What’s the most mischievous or crazy thing Clyde did on the Marley & Me set?

A: “We were doing a scene, Jen and Owen, their characters have come back from Ireland, and they’ve left Marley with the babysitter. So we’re shooting the scene and in the middle of it, Clyde just lifts his leg and starts peeing on the coffee table – for real. For a trainer that’s such a no-no. He started doing it and then the trainer ran into the shot. The director leaped out of his chair and goes, ‘No! No!’ He loved it. Anyways, after that, they wrote that into the scene.”

Q: What’s the best part about being a star dog?

A: “The attention. They come to set every day, they have all these people who give them attention all day long, they’re working – it’s really a great life. For him … it was such an experience, going to a new location every day, coming out and doing some crazy scene, meeting new people – that’s Clyde: he just loves life.”

A: “His favorite thing in the world is to tear stuff up. So the scenes where he’s tearing up the couch, or ripping up his dog toys … that is his joy in life. There’s one thing he loves more than ripping stuff up, and that’s water. If there’s a swimming pool, the ocean, a lake, a river – if there’s a body of water around, he’s in it.”

A: His teeth are brushed “every once in a while,” and he gets a bath “once every two or three weeks,” says Forbes. “He’s a low-maintenance guy.”

Q: Does Clyde have a girlfriend?

A: “Clyde is actually fixed, so he has lots of friends…but nothing serious.”

Q: Is Clyde really as bad as the real Marley?

A: “I wouldn’t use the word ‘bad,’ says his trainer. “I would use the word ‘rambunctious. Slightly out of control. Mischievous. Joyful.’ I would say he’s very much like real Marley. In fact, John Grogan, the real author of the book, came down to set and definitely said that Clyde definitely embodies the spirit of Marley.”

Can’t get enough of Marley & Me? See behind-the-scenes photos from the movie and read Entertainment Weekly’s exclusive interview with Jennifer Aniston. 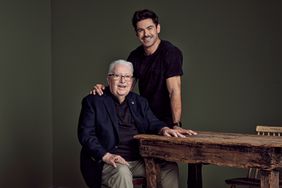