Jacksonville Zoo and Gardens is closing out Manatee Awareness Month with a sweet homecoming story.

After spending three months at the zoo's Manatee Critical Care Center, Lusia, a female manatee named after the Florida county she was rescued in, was released on Nov. 19 in Daytona Beach waters, according to a zoo press release.

On Aug. 22, Lusia was rescued by the Florida Fish and Wildlife Conservation Commission with help from the Volusia County Marine Mammal Stranding Team when she was found floating buoyant on her left side.

A team of experts found that her injuries indicated a boat strike which included a linear wound across her back, fractured ribs, and a partially collapsed lung.

Rescued Seal Pippi Returns to Her Ocean Home After Nine Months of Rehab: 'She Is a Fighter'

"When we received Lusia, we were guarded about her survival due to the extent of her injuries," Craig Miller, the Jacksonville Zoo and Gardens curator of mammals, said in a release. "Our vet team started supportive care right away and eventually worked to alleviate the trapped air from her punctured lung, and our keeper staff continually cared for and monitored her."

Miller noted that Lusia "maintained a good appetite and behavior overall" which was helpful in her recovery.

Zoo staff estimated Lusia to be around 4 years old due to her size, weighing 713 pounds at her release.

"It’s great to finally release her and we hope Lusia’s story reminds all of us boaters to remain aware of manatees and other marine life out on the water," Miller added.

Manatee Awareness Month serves as a reminder to "boaters to slow down during water activities as much as possible, always follow posted speed zones, wear polarized sunglasses to help spot manatees, stay a safe distance away if spotted, and remain in deep water channels whenever possible," read the release.

Lusia marks the third manatee release for the zoo in 2020 and the 16th total since the opening of the Manatee Critical Care Center in 2017. The manatee rescue and rehabilitation program is the zoo's largest regional conservation initiative, according to the release. 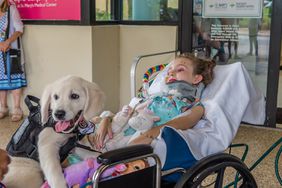