In just a few months, Monty went from a kill shelter in New Mexico to the set of a Disney film

Today is Monty’s first National Dog Day as a full-blown celebrity. The scruffy mutt with the enchanting eyes is starring as Tramp in Disney’s live-action Lady and the Tramp remake and is BFFs with Justin Theroux — who will voice Tramp in the new take on the classic — but his life was far less glamorous just a few months ago.

Monty wasn’t born with his muzzle in a silver bowl or into a canine acting dynasty. Not long ago, he was sitting in a cage at a kill shelter in New Mexico, hoping to be adopted before time ran out.

Luckily, Monty was pulled from this shelter by HALO Animal Rescue. The Phoenix-based no-kill shelter devoted themselves to caring for Monty until the perfect pet parent was found. That dog dad happened to be Mark Forbes, an experienced animal trainer who has worked with animal actors for dozens of films

Forbes, along with looking for a new companion, was searching for a charming star among the thousands of amazing pets available for adoption each day in America.

Brigham Taylor, the producer of the upcoming Lady and the Tramp remake, knew he wanted to use real dogs as the principal actors in the film, because nothing can replace “the reaction you get when you stare into the eyes of an actual dog.”

“Once we started turning our attention to casting the main dogs, in that same breath we said, ‘We need to rescue as many of these dogs as we can.'” Taylor told PEOPLE. “Tramp, certainly had to be a rescue.”

This certainty is what eventually led to Monty’s adoption by Forbes, who, along with fellow trainers from Birds and Animals Unlimited, trained many of the dogs in the remake.

“We had to cast this iconic character, who is a mutt, so there’s no breed to go on,” Forbes said, adding that it all came down to finding a dog that had the right flop in their ears.

“We started looking at pictures of dogs up for adoption from all over the country. Luckily, you can do that all online.”

After some searching, they found a photo of Monty, who might be part Airedale terrier and part Schnauzer, according Forbes, and everyone agreed this pooch was their Tramp, so Forbes went out to Arizona to adopt the dog and begin training.

Likely around 8 months old when he was adopted, Monty still had a lot of rascally, puppy energy in him when he started preparing for his leading role.

“Any dog will be trainable. As long as your are positive, they will enjoy it,” Forbes said, but Monty’s training was especially enjoyable for both Forbes and the pooch, thanks to Monty’s goofy energy.

This sweet, playful demeanor helped transform Monty into the Tramp dog lovers will be able to see exclusively on Disney+ when the remake premieres on the new streaming platform on Nov. 12.

Disney released the first official trailer for the remake on Friday at the D23 Expo in Anaheim, California. 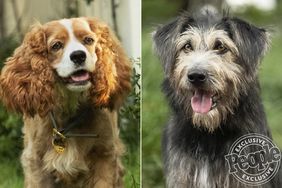 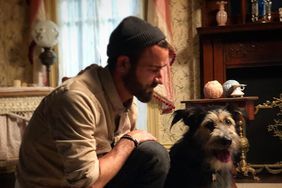