If this whole singing, dancing and acting thing doesn’t work out, Julianne Hough might have a second career – publicist to her dogs.

“I’m obsessed,” Hough told PEOPLE at the QVC Fashion’s Night Out event in New York Thursday. “Literally, people who follow me on Twitter are like, ‘Can you please stop Tweeting about your dogs? Because we get it. They’re cute.’”

Hough’s two Cavalier King Charles Spaniels, Lexi and Harley, have no bigger cheerleader than Mom – though they can count Tom Cruise and Ryan Seacrest among their fans. Whether she’s in New York, Miami, L.A. or elsewhere, Hough always has her girls with her, and the pups have gotten famous right alongside her. PHOTOS: Julianne Hough’s Puppy Love

“They definitely know they’re famous,” she said. “They know everything. They’re like humans. They’re my daughters.”

All the attention hasn’t gone unnoticed. “Lexi is like a prima donna, a princess. ‘Don’t touch me. I model,’” Hough said. “I call her Cindy Crawford because she has this mole and it’s so cute.”

“Harley is just sassy pants,” she added. “She just starts fire. Lexi was a little bit jealous in the beginning, but now they love each other.”

• Leona Lewis Goes to the Farm

• Overjoyed Chimps See Daylight for the First Time in Decades” “” ]

Julianne Hough: Tom Cruise Is a Fan of New Puppy 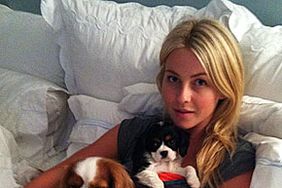 The Daily Treat: Julianne Hough Puckers Up to a Harley – Her Dog