An always-active Matthew McConaughey hits the beach with pup BJ in Malibu, Calif. on Tuesday. The week before, the duo went for a roadside run.

Jessica Biel and dog Tina wrap up a workout in Los Angeles’ Runyon Canyon Park on Wednesday. The actress and boyfriend Justin Timberlake are regularly seen out with Biel’s rescue pup.

Miley Cyrus heads into a Hollywood recording studio with grandma and maltipoo Sophie in tow on Sunday. The Hannah Montana singer/actress was most recently seen at the January 19th Kids’ Inaugural Concert in Washington, D.C.

Jennifer Hudson and one of her pups – she has two, aptly named Oscar and Grammy – walk through the Tampa Bay, Fla., airport on Thursday, days before the diva delivered a rousing rendition of the National Anthem at the Super Bowl.

Looks like they’re enjoying the sand between their toes! Actress Charlize Theron and her mom (not pictured) took their pack of pooches for a beachside stroll in Malibu on Saturday.

Celeb stylist Ken Paves – hair guru to Jessica Simpson, Eva Longoria and other Hollywood starlets – pauses during a run with his four pooches in Beverly Hills on Sunday. Their hair looks fab!

James Bond himself, Pierce Brosnan, takes his dog on an errand run in Malibu last week before loading him up in the back of his Range Rover. The actor was recently in Park City, Utah, to premiere his film The Greatest at the Sundance Film Festival.

TWO IF BY SEA

Think he knows how to swim? Smoldering singer Enrique Iglesias keeps it casual while boating and bonding with his German shepherd in Miami on Friday. 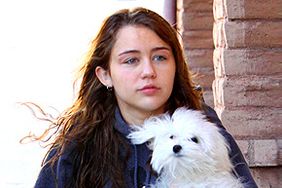 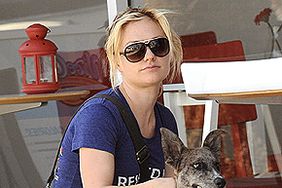