Joaquin Phoenix practices what he preaches.

Just one day after Phoenix, 45, advocated for animal rights during his Oscars acceptance speech for best actor on Feb. 9, the Joker star helped liberate a cow and her newborn calf from a Los Angeles slaughterhouse and brought them to Farm Sanctuary in Acton, California.

The act was shared in a video on YouTube by Farm Sanctuary — an American animal protection organization, founded in 1986 as an advocate for farmed animals — and shows Phoenix meeting the cow Liberty and her baby Indigo for the first time.

The video starts with an explanation that the rescue mission “was not planned” and then shows Phoenix meeting with Anthony Di Maria, the CEO and president of the slaughterhouse.

“I don’t need really any science to see with my owns eyes and hear how an animal responds to pain,” Phoenix says while sitting in Di Maria’s office.

“An animal will perish in less than 60 seconds — it has to. That is the most humane, human harvest process in the country,” Di Maria explains.

“You’re the only one that you know of that has a process that you have, so that means a majority of them don’t have that,” Phoenix says, adding that other slaughterhouses separate mothers from their calves.

Di Maria then interjects, reassuring Phoenix that he never takes calves away from their mothers — and that a baby was just born on the grounds and has been isolated with its mother — that baby being Indigo.

“Any time a calf is born on my property, I refuse to take the mother away from its baby,” Di Maria says.

While Di Maria assures Phoenix that he tries his best to use the most humane practices, Phoenix interjects, explaining that all the cows on his property will still ultimately be “murdered.”

Di Maria attempts to correct Phoenix by saying the cows are simply “harvested,” but Phoenix disagrees and continues to call it “murder.”

Joaquin Phoenix Comforted Pigs at L.A. Slaughterhouse After SAG Award Win: ‘I Have to Be Here’

“You have to understand my side, like I understand yours,” Di Maria asks before giving Phoenix a tour of the property.

As they approach the area where Liberty and Indigo are resting, Phoenix learns that the calf was born just “about a week ago.”

Because of Di Maria’s belief in not killing mothers and babies, Phoenix is allowed to take Liberty and Indigo from the slaughterhouse.

A white truck then pulls up to the area as Phoenix and and Farm Sanctuary staffers load the baby and mother onto the vehicle to freedom.

The clip shows the truck driving off into the mountains before arriving at Farm Sanctuary — a meadow-like destination where animals, that have previously been in captivity, can roam the miles of fields and pastures uninterrupted.

A Farm Sanctuary staffer explains that animals brought from slaughterhouses are checked for diseases before being integrated with the other animals living at the Sanctuary.

“Oh my love,” Phoenix says as they unload Indigo and Liberty from the truck.

Liberty and Indigo are then let go on to a field.

Little Indigo is seen running wildly as Liberty takes in her new surroundings.

“I never thought I’d find friendship in a slaughterhouse, but meeting Anthony and opening my heart to his, I realize we might have more in common than we do differences. Without his act of kindness, Liberty and her baby calf, Indigo, would have met a terrible demise,” Phoenix said in the description of the video.

“Although we will continue to fight for the liberation of all animals who suffer in these oppressive systems, we must take pause to acknowledge and celebrate the victories, and the people who helped achieve them,” he continued.

“My hope is, as we watch baby Indigo grow up with her mom Liberty at Farm Sanctuary, that we’ll always remember that friendships can emerge in the most unexpected places; and no matter our differences, kindness and compassion should rule everything around us,” Phoenix added.

In his Oscars speech, Phoenix encouraged veganism saying, “We feel entitled to artificially inseminate a cow and when she gives birth we steal her baby even though her cries of anguish are unmistakable and then we take her milk that’s intended for her calf and we put in our coffee and our cereal.”

Phoenix has long been an advocate for animal rights.

Back in June, he and his fiancée Rooney Mara marched together during the National Animal Rights Day demonstration in West Hollywood, California.

The actors, who are both vegans, wore black T-shirts and pants as they held dead birds in their gloved hands during the demonstration.

The nonprofit Our Planet. Theirs Too. created the annual day of observance in 2011 in order to give all animals a voice. 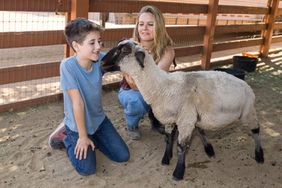 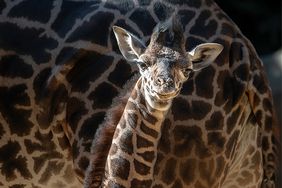 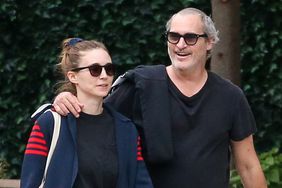 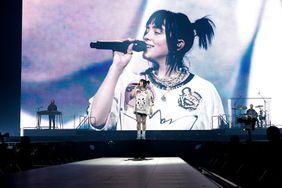 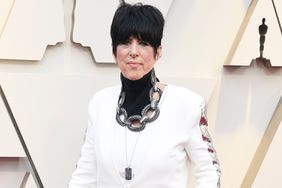 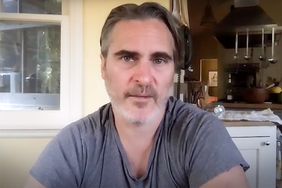