Herds of Hungry Goats with an Appetite for Noxious Weeds are Helping the U.S. Fight Wildfires

Colorado-based Goat Green LLC provides goats to government agencies and private owners in 15 U.S. states, from California to Texas, to help clear brush and weeds that act as fuel for wildfires

Lani Malmberg grew up on her family's Wyoming cattle ranch. Yet, she had never seen a goat in her life before deciding to go into business with the adorable eco-friendly animals.

"I treated them like cattle, and then I learned they are nothing like cattle," says Malmberg, 64, of her first experiences. "They're completely different creatures. They're fascinating, extremely intelligent, can go with very little water, and they eat all the weeds cattle and horses don't."

Goats bypass the grasses cattle and horses primarily eat, preferring the noxious plants that serve as kindling to wildfires. This trait makes the critters perfect weed eaters in the battle to clear out brush that has fueled the recent epic wildfires in the western United States.

Malmberg and her son Donny, 38, own the Colorado-based Goat Green LLC, which provides goats to government agencies and private owners in 15 western U.S. states from California to Texas.

Goats, she learned, were the answer to so many environmental problems, from climate change enhanced wildfires to soil conservation. Their hooves aerate the soil, while their urine and feces enrich it.

Malmberg's goat journey began when she was a 33-year-old single mom with two young sons, Reggie and Donny. Previously she had managed cattle ranches with her former husband before getting a job driving a truck in the oil fields. The pipeline put the truckers out of business, and she was given the opportunity to go back to college as part of a retraining program.

She never imagined she'd be studying weed management and eventually earning a master's degree that led her to her current career as a goat herder. She is now caring for the 27th generation of the original herd that she purchased in 1997.

She has three generations of border collies descended from her first dog, Zippy, Rosco's grandfather. Rosco, mom Banjo and grandmother Kit still work the herd. But that wasn't always the case. When the family bought their first cashmere goats when Donny was just 11 from the money he and his brother, then 12, earned working for the university's sheep project, no dogs were gathering up the goats. If you can find people willing to sell them, trained border collies can cost around $10-20,000 each.

"My brother and I were basically the border collies, and we ran a lot," says Donny with a laugh. "Good thing we were young and spry because we ran a lot before we (got the dogs)."

Donny earned a master's in business and worked in the financial world until he decided that it wasn't the proper lifestyle for him a few years ago. He returned to continue his mom's dream of making this into a multi-generational business. The family has set up a foundation to help train people who want to get into this field.

"I didn't like being the broke kid (growing up), so I wanted fancy everything and realized quickly that wasn't what I wanted at all," Donny says. "We've built this business where you can make a very good living. And I can't imagine now not being on the land and doing what I do."

To read more about Goat Green LLC, pick up the latest issue of PEOPLE — on newsstands now. 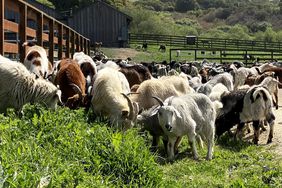 Lois Gibbs, the Love Canal Heroine, Is Making Hazardous Wastes An Industry of Her Own

The Cloud Over Paradise Valley