From Ricky Gervais to Russell Brand, these famous names have an affinity for felines

The returning Golden Globes host frequently shares photos on Twitter of his handsome Siamese, Ollie, who was given to him by British talk show host Jonathan Ross. Gervais rang in 2012 with a kitty-themed musing attributed to Terry Pratchett: “In ancient times cats were worshipped as gods; they have not forgotten this.”

Brand and his ex, , shared a love of cats. “Me and the wife have got three cats and they get whatever they want,” he told PEOPLE in April of Morrissey, Kitty Purry and Krusty.

The , who has felines Sammy and Zelda, was “raised as a cat person,” he told PEOPLE. “I don’t really know how to take care of a dog, but I think I’m pretty good with cats.”

The younger Franco is also the proud parent of two cats, Harry and Arturo, and starred in a Funny or Die video that spoofed the family’s love of felines. “We’re definitely a cat family,” he told PEOPLE.

The Vampire Diaries actor shares his Atlanta loft with three kitties. “I literally wake up and there’s just fur everywhere. It’s so awesome,” he told PEOPLE.

You could call the 30 Minutes or Less star’s home a refuge for less fortunate felines. “I’m a foster parent for cats, and the more movies I do, the more guilty I feel – and the more cats I feel the need to get to alleviate the guilt from doing the movies,” Eisenberg told Conan O’Brien in 2010.

The Guns N’ Roses frontman had just one thing to say about this photogenic feline he introduced on Twitter: “Dijon,” he wrote.

The Mission Impossible star shared a shot of a French kitty having very sweet dreams. “My hotel has a cat,” he Tweeted. “Makes me wonder why all hotels don’t have cats hanging around the corridors looking simultaneously hopeful and nonplussed.”

A fan of both cats and dogs, the actor snuggled up to one special kitty at his New York home in 1990 for a Life magazine interview.

Cats have taken over the Castle star’s life. “I’m closer to being a crazy cat lady than I wanted to believe,” he told Jimmy Kimmel last year. “I’m too far gone. I’m here for an intervention.”

The Dexter star opts for quiet nights in with his best buddies, Preacher and Ford, over wild nights out on the town. “They’re both very affectionate,” he told PEOPLE. “They’re my four-legged friends.” Hall, seen here during a break during filming of the 2011 dramedy The Trouble with Bliss, gets friendly with a cat on a New York City awning.

At the 2010 Winter Olympics in Vancouver, the faux pundit purr-rused an issue of Cat Fancy magazine – long regarded as the bible for cat lovers everywhere. He often features cats on The Colbert Report, including intrepid reporter Christiane Aman-purr.

The Aerosmith guitarist is devoted to a Maine coon named Icon that he bought his wife, Billie, several years ago. “He’s more than a cat,” he shared on Twitter.

The actor’s pet wasn’t pleased when his new drama The Playboy Club was taken off the air in 2011. “My show was cancelled today and this is how my cat feels about it,” he joked. 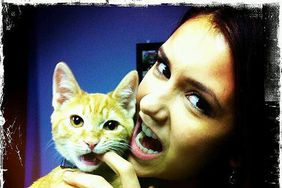 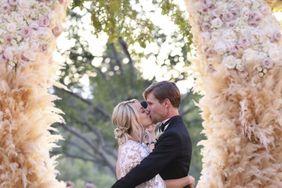