Wag those tails! The First Dog adds another candle to the cake on Oct. 9

Now that he’s got four years under his belt, Bo Obama has become an adult! We’d like to celebrate our favorite First Pet with a look back at his life so far.

It’s hard to believe that Bo once was this tiny, but he was. With the help of the late Sen. Ted Kennedy and his wife, the puppy went from a breeder to a Virginia dog trainer, and finally, to the White House.

The lucky 6-month-old pup, who got his name from Sasha and Malia Obama, meets his public as the First Dog when he arrives at the White House on April 14, 2009. He does it Hawaiian-style, with a colorful lei.

Getting a dog was part of a campaign promise President Barack Obama made when he became president elect in 2008: “I love you both more than you imagine,” he said to his daughters. “You have earned the puppy that is coming with us to the White House.”

Once you’re officially part of the First Family, you need to get your official portrait taken.

New running mate? President Obama takes a lap around the picturesque South Lawn with his new Portie puppy in April 2009.

How better to pass time until Dad gets home than to play with the dog? Malia gives happy Bo a belly rub as Sasha looks on in September 2009.

Everyone could use a little mental health break – especially the President. Bo shows him how it’s done in October 2009.

Give me five! First Lady Michelle Obama looks proud of her baby boy during a December 2009 holiday reading of ‘Twas the Night Before Christmas at Children’s National Medical Center in Washington, D.C.

Wheee! Thanks to a February 2010 record snow storm on the East Coast, Bo gets to have a really good, extra-fluffy time playing in the white stuff.

The First Lady often brings Bo to public events, but during a 2010 Take Our Daughters and Sons to Work Day Q&A session at the White House, the barking pooch has to be taken out of the room.

Boarding Air Force One is just another trick in Bo’s bag. He takes on the tarmac like a champ for a trip home from Martha’s Vineyard in August 2010.

Bo commands attention at a November 2010 reception for recipients of the President’s Active Lifestyle Achievement Award.

Big boy Bo knows how to take it easy. He has it made in the shade on a hot summer day in June 2011.

The President took Bo to Petsmart in December 2011 for a little last-minute Christmas shopping. While at the store, the pooch encountered a small brown standard poodle named Cinnamon, prompting the President to say, “OK, Bo, don’t get too personal here.”

Seeing as he is her favorite son, the First Dog was at the ready when put together her book American Grown in 2012.

During a special visit to the White House in May 2012, sat down with Bo for an “interview.” The talk show host also cooked up three dishes with the First Lady using vegetables from Mrs. O’s garden.

The President makes time for his Number 1 pal in June 2012. “Buddies,” read the caption of the photo shared on the Commander in Chief’s Twitter feed. 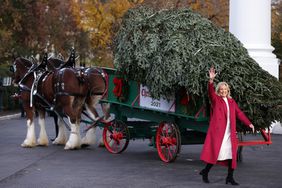 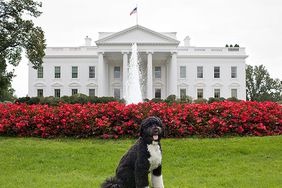 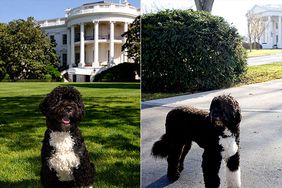 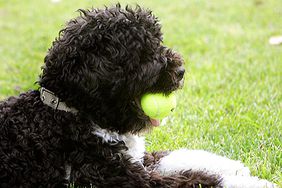 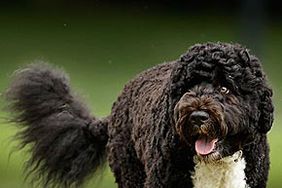 10 Things the First Dog Will Teach the Second Dog 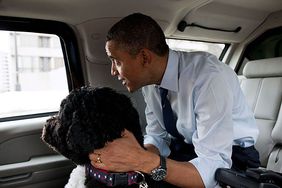