The famed kitty first found internet fame in 2012, and went on to become a household name with everything from plush toys and books to her own movie

Here’s something to be grumpy about: Grumpy Cat, the furry feline who started as an Internet meme sensation before becoming a household name, has died. She was 7.

Grumpy’s caretakers — Tabatha Bundesen, her brother Bryan Bundesen and her daughter Crystal Bundesen, all of Morristown, Arizona — announced the news on Friday morning in a touching message to the cat’s more than 12.4 million followers across social media.

They explained that the cat had died “peacefully” in Tabatha’s arms on Tuesday morning, due to complications from a recent urinary tract infection that “unfortunately became too tough to overcome.”

“We are unimaginably heartbroken to announce the loss of our beloved Grumpy Cat,” they wrote of the animal, who was born on April 4, 2012. “Besides being our baby and a cherished member of the family, Grumpy Cat has helped millions of people smile all around the world — even when times were tough.”

“Her spirit will continue to live on through her fans everywhere,” they added in their emotional note.

The post, which came with a photo of Grumpy, was titled: “Some days are grumpier than others.”

Purr-fect! Grumpy Cat Makes History in Broadway’s Cats
The Water Bowl: Why Is Grumpy Cat the Internet Cat So Grumpy?

Grumpy Cat first found internet fame on Sept. 22, 2012, when Bryan posted a picture of the cat — then going by the name Tardar Sauce — to Reddit. The picture was quickly circulated, with parodies of the seemingly unhappy kitten popping up everywhere. In just 48 hours, Bryan’s post had earned over a million views and the persona of Grumpy Cat was born.

Sponsorship deals came next. Purina nabbed her as the face of Friskies and she also scored herself a television commercial for Honey Nut Cheerios, too.

Soon after, Grumpy Cat: A Grumpy Book made the New York Times bestsellers list, a Lifetime movie, Grumpy Cat’s Worst Christmas Ever, had Grumpy Cat voiced by Parks and Recreation actress Aubrey Plaza, and she made Broadway history as the first genuine kitty ever to appear in Andrew Lloyd Webber’s Cats.

At one point, Grumpy Cat was estimated to be worth more than $1 million.

The irony of it all was that Grumpy Cat wasn’t, well, grumpy at all.

“Misery loves company,” she said of Grumpy’s success. “People feel if Grumpy’s having a bad day, too, they can use her as a way to communicate their negative feelings.”

Is Grumpy Cat Really Worth $100 Million? 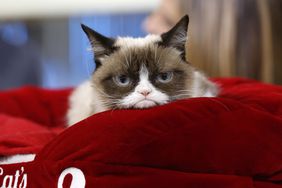 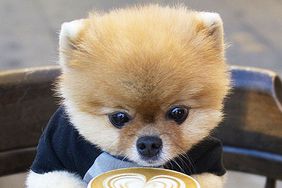