"There will never be another quite like our boy," Fuller House tweeted

Fuller House is mourning the loss of its beloved cast member Cosmo the dog.

On Monday, the show tweeted that the “faithful” pooch died following complications from surgery.

“We’re sad to share that Fullers’ faithful dog Cosmo, who grew up on our set, passed away after complications from surgery. There will never be another quite like our boy. We’ll miss him forever,” Fuller House tweeted.

Along with the sweet message, Fuller House shared a series of adorable photos, showing Cosmo with his best bud Elias Harger, who plays Max Fuller on the show. The post also included solo shots of Cosmo, who is seen peering up at the camera.

Following the news of Cosmo’s death, Harger, 12, also paid tribute to the dog on social media.

“I love you, Cosmo! RIP — Two weeks before the end of @fullerhouse, I lost my buddy. I made this video to honor @cosmofullerhouse,” Harger wrote alongside a compilation of memories he shared with Cosmo while on set.

The clip included images of Cosmo and Harger cuddled up together as well as a photo of the pair playing tug of war.

“Our sweet boy Cosmo is now running around in doggie heaven. I imagine he’s playing with Comet right now,” Cameron-Bure, 43, wrote in reference to her character’s childhood pet, who was introduced on the original series Full House.

“Cosmo has been in Fuller House since the start and we are heartbroken that he passed away during surgery complications. You’ll be so missed love bug,” Cameron-Bure added.

The cast of the Netflix reboot series shared numerous photos marking the occasion that captured their emotional goodbyes upon finishing the fifth and final season.

PEOPLE Takes You on the Set of Fuller House: John Stamos Says, ‘We Never Stopped Loving Each Other’

“After the final ever episode of the 5th season of Fuller House,” he wrote. “This photo that Candace sent me sums it all up. So proud of the incredible work, love, and deep friendship of Candace, Jodie, and Andrea who made Fuller House such a special show for so many. Here’s to five wonderful years full of love and laughter, and more love. These are three incredible and talented women. I love them all so much.”

Saget, 63, also shared a photo from the last day on the Warner Brothers’ set alongside his longtime costars Dave Coulier and John Stamos.

“Last night, standing in the stage door with my brothers for life— John and Dave —after filming the last episode of the 5th and final season of Fuller House,” he wrote. “So much love for everyone involved with this show.”

Cameron-Bure commemorated the series’ end with a photo of herself smooching her real-life husband, Valeri Bure, as a huge crowd of cast and crew surrounded them.

Her on-screen sister Sweetin, 37, shared a selfie from the show’s iconic couch, captioning the image, “This couch. This show. This family. I will miss this with all my heart. #fullerhouse #fullhousefamily#onelasttime #goodbyesarenevereasy.”

Netflix announced the final season of Fuller House in January. The show was a reboot of the ’80s-’90s sitcom Full House, which featured widower Danny Tanner (Saget) raising three daughters with the help of his brother-in-law, Jesse (Stamos), and best friend, Joey (Coulier).

The 2016 Netflix reboot centered on Danny’s eldest daughter, D.J. (Cameron-Bure), a 30-something widow bringing up three kids of her own with the help of her sister Stephanie (Sweetin) and childhood BFF Kimmy Gibbler (Barber). 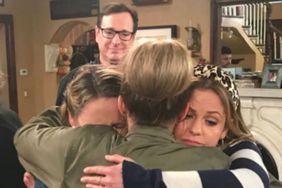 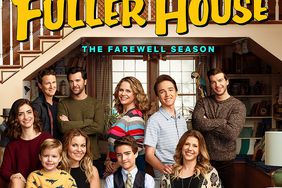