Captured at Loro Parque, an aquatic attraction in the Canary Islands, the video shows a killer whale on loan to the park by SeaWorld repeatedly banging its head against its enclosure.

Loro Parque has six orca whales, all owned by SeaWorld. Four were sent over on a breeding loan, one was born at the park and a sixth was rescued from the ocean and then sent to the attraction to live instead of being released. The Dolphin Project believe it is this final whale, named Morgan, who is shown suffering in the footage.

This video comes shortly after SeaWorld’s announcement that it will be ending its breeding programs at the company’s American parks, and has many demanding that SeaWorld claim responsibility for its animals outside North America as well.

Groups like the Free Morgan Foundation are pressuring SeaWorld to take action after the abysmal treatment they have witnessed at Loro Parque.

“Since her transfer she has been brutally and continually attacked and is subjected to excessive sexual pressure from a male orca who she is often locked into the same tank with,” cites an observation of Morgan done by the foundation over 77 hours and 16 minutes.

The observations adds, “Morgan, was attacked, on average, more than once an hour. The other study recorded an aggressive episode only once every 234 hours … This does not include the damage she has self-inflicted from abnormal and repetitive behaviors such as banging her head on the concrete tanks. Additionally, Morgan is wearing her teeth down from chewing on the concrete. Teeth wear in captive orca often leads to infections.”

The Dolphin Project claims its footage shows the orca, stuck in a small medical pool, exhibiting some of these behaviors as the animal tries to escape the enclosure she is in held in with another whale by repeatedly banging against the gate.

According to International Business Times, Loro Parqure responded to The Dolphin Project’s claims, stating that the video is manipulative and exaggerated, and that the whale was not in distress, but instead releasing pent up sexual energy. 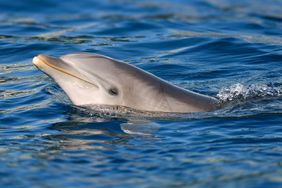 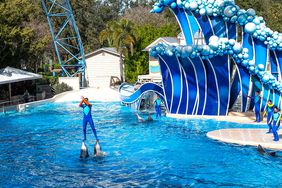 SeaWorld to End 'Dolphin Surfing' Trainer Tricks at All Parks