What could be more fun than Jennifer Aniston, Owen Wilson and a bunch of Lab puppies? The making of Marley & Me, a new DVD that brings the best-selling book to life.

“She came really close to adopting one,” says director David Frankel of his female lead, Jennifer Aniston, who plays Jennifer Grogan in Marley & Me. A dog lover in real-life, Aniston is already mom to dogs Norman and Dolly. “In the end,she felt she had her hands full.”

Dozens of dogs played Marley throughout the film. In this scene, Clyde, the dog that often played “naughty” Marley, takes Aniston’s character for a walk during dog-training class. “Clyde let havoc rein, there’s no acting here, he’s not being coached to run anywhere,” Frankel says.

The cast and crew of Marley & Me couldn’t resist the charms of the adorable puppies used in the film – 11 pups were used and each of them was adopted by members of the crew. “They were all spoken for immediately,” says Frankel.

One pup takes a breather in a bathroom on the set of Marley & Me. Shooting in Miami in April and May meant dealing with warm temperatures, so air conditioning and plenty of water were always on hand. As the director says, they had to be sure the dogs “wouldn’t be panting through scenes.”

In this scene, a young Marley stuffs his face with kibble when his parents aren’t looking. “We kept having to switch out the puppies because they would be eating voraciously and eventually lost their appetite,” Frankel remembers. It took twenty takes and several puppies to get it just right.

Clyde the dog enjoys a playful romp through a field as the camera rolls. Owned by dog trainer Mathilde De Cagny, this pooch is “an incredible athlete,” says Frankel. The fence in the background is only 4 feet high but “we could have made that fence 8 feet high and he would have found a way to get over it.”

Owen Wilson and his costar Copper the dog, who played an older Marley, are seen here taking a break in-between takes on a beautiful day in the Pennsylvania countryside. “Copper didn’t really move so well, so rather than moving him [a costume designer] created shade for him there,” says Frankel of the 13-year-old dog.

Puppy “accidents” on set were never a problem because, “they took breaks frequently for water, poop, sleep,” Frankel explains. But the crew had to be germ conscious when it came to filming with them. “Everybody had to wear booties and try not to contaminate their area,” he says, adding that Aniston and Wilson were the only ones permitted to go booty-less.

A clapboard signals the beginning of a scene in which Marley destroys an area of the garage during a thunderstorm. Although there were three litters of puppies on set at different times, there weren’t any like the real-life Marley, a rowdy and disobedient yellow Labrador retriever.

A middle-aged Marley, played here by Rudy the dog, gets ready to greet the Grogan children at the school bus stop. Ten or eleven adult dogs played the part of Marley, finding those dogs took “very careful casting, so we could get away with switching them all in,” says Frankel.

Can’t get enough Marley & Me? Read our interview with the movie’s star dog, Clyde, and Entertainment Weekly’s exclusive with Jennifer Aniston. 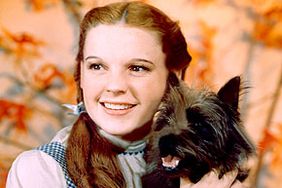 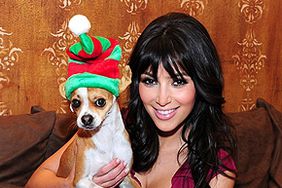 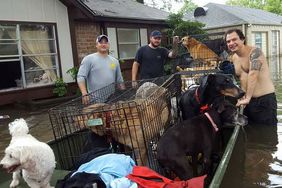 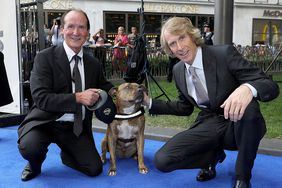 Freya, Britain's Former 'Loneliest Dog,' Revels in Her 'Transformers' Debut — and Plans to Do More Acting