The "Shape of You" singer has a new likeness in London

If you’re looking for Ed Sheeran, you’ll find him in the purr-fect spot.

A wax likeness of the 27-year-old singer was unveiled on Tuesday at Lady Dinah’s Cat Emporium, a cat café in the Bethnal Green neighborhood of London. The figure will hang with the cats and coffees there for one week before officially moving over to its permanent home at Madame Tussauds London.

Sheeran is a noted cat lover: he regularly shares photos of his felines Chub and Chubber on Instagram, and even started a Twitter account for another cat he rescued back in 2014. Madame Tussauds thought putting Sheeran’s wax figure in the cat café would “make it a bit of fun — what an unusual way to unveil the figure,” a spokeswoman for the museum said (see more in the clip above).

Sheeran first sat for a figure-making session in 2015, ahead of the unveiling of his New York City statue. Madame Tussauds took that mold and added some of the singer’s more recent tattoos for this new version.

No word on what pal Taylor Swift‘s cats Olivia and Meredith think of the mews. 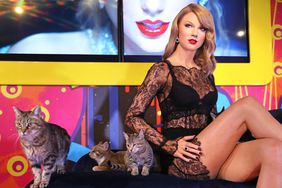 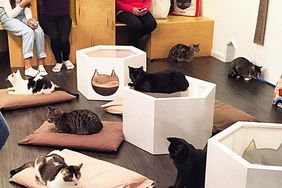