Ed Sheeran is mourning the loss of one of his beloved cats, Graham, who was hit by a car and killed this week.

The singer, 28, posted a picture of the little feline snuggled up to his guitar on Instagram, captioned simply with a broken heart. Commenters flooded his feed with tributes, and pointed to the Instagram account of Liberty Shaw, the girlfriend of Sheeran’s manager, Stuart Camp.

Shaw confirmed Graham’s, a.k.a. “our lovely little buddy Baby Ba Boo’s” death, saying he died on Wednesday night after being hit by a car.

“We are absolutely heartbroken,” she wrote. “He was such a dude. Funny and clever and best mates with a massive German shepherd. We are going to miss you so much. Thanks for all the fun.”

Various sites report that Sheeran rescued the cat in 2014, and left him with Shaw and Camp while he was away. Earlier in the animal’s life, Camp and Sheeran seemingly documented his goings-on on Twitter.

Sheeran, with wife Cherry Seaborn, is also a cat dad to Dorito and Calippo, whose adventures are chronicled to 374,000 followers on Instagram. 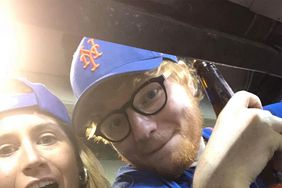