Knickers the Giant Cow Has Some Big Competition: Dozer the Steer Claims He Is 1 In. Taller

The gentle giant lives at a farm animal sanctuary in Manitoba, Canada

The world is full of big, beautiful cows just waiting to be adored.

Days after Knickers the steer made headlines for his massive 3,000-lb. frame and 6-ft., 4-in., height, another bovine is experiencing stardom for being 1 in. taller than Knickers.

Meet Dozer, a 6-ft.-, 5-in.-tall Holstein steer living at Kismet Creek Farm sanctuary in Manitoba, Canada. Like Knickers, Dozer was spared from the slaughterhouse, but not because he was too large.

Raelle Schoenrock, Dozer’s caretaker at Kismet Creek Farm, met the steer thanks to a compassionate animal lover named Rebecca Hanuschuk. According to Schoenrock, Hanuschuk first met Dozer, then 6 months old, on a beef farm and fell in love with the animal. When it came time to send the steer to slaughter, his owner didn’t have the heart to say goodbye to the animal, so Hanuschuk saved up and bought Dozer, promising to give the steer a better life.

She found that better life for the animal at Kismet Creek Farms. When approached by Hanuschuk, Schoenrock agreed to give Dozer a forever home, even upgrading the sanctuary’s fencing and modifying a cow shelter to suit the extra-large animal.

RELATED: Massive 3,000-lb. Cow Saved from Slaughterhouse Because He Is Too Big to Sell

Dozer moved in late last year and embodies the title “gentle giant,” according to Schoenrock and her husband Karl, who run the sanctuary in their free time. The steer lives at the rescue farm with around 90 other animals, all of whom receive food, vet care and endless affection from the Schoenrocks, who consider all of their animals to be part of their family.

“He’s just the friendliest animal,” Schoenrock told the New York Post. “He’s not very intimidating at all, except for his size. If you stood next to him he’ll just lay down next to you.”

While being big means plenty of press attention, it also means extra health issues. Schoenrock told PEOPLE that Dozer recently received treatment for some size-related issues, but he is in good spirits and health overall.

Kismet Creek Farm hopes the growing interest in big bovines will encourage people to rethink the way they eat and live. 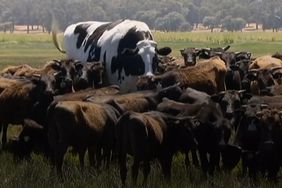 Massive 3,000-lb. Cow Saved from Slaughterhouse Because He Is Too Big to Sell