Since Nick Abbott adopted the young black lab mix, the pair have formed an unbreakable bond

A Maine man who was born deaf has found the ultimate companion in a dog who, like him, also cannot hear.

Since Nick Abbott adopted Emerson last month, the pair have formed an unbreakable bond — in part due to the fact that they both are deaf.

Despite their respective disabilities, Abbott, 31, and Emerson have learned to communicate in their own special way, with the owner now teaching his pooch sign language, as they embark on this “journey through life together.”

Abbott first expressed interest in adopting the young black lab mix from NFR Maine in March, after the nonprofit animal organization rescued the pooch and put him up for adoption, Good Morning America reports.

Emerson had a particularly tough past, as NFR Maine explained that after he was found on the streets with his siblings, he began to have seizures.

Once hospitalized, Emerson contracted a case of parvo, a highly contagious viral illness that can come as an intestinal or cardiac form, according to Pet MD.

Though Emerson had recovered and was healthy and adorable at the time of his listing, NFR Maine feared that people wouldn’t be interested in the 12-week-old pup as he was now deaf and visually impaired — that is until Abbott came into the picture.

Abbott found Emerson’s disabilities to be the most appealing thing about the little pooch and reached out to the foster-based rescue, explaining how he was also deaf.

“Nick said he was interested in meeting Emerson because they would understand each other, being that they both share the same hearing difficulties,” a rep from NFR Maine recalled to their followers on Facebook.

Speaking to CBS News, Nick echoed those sentiments. “I was drawn to him right away because we had similarities. I felt I could understand him,” he said.

It was a match made in heaven, the organization explained, as the duo immediately hit it off on their first interaction.

“When Nick and his Mom walked into the house to meet Emerson, Emerson made a direct line for Nick and sat at his feet. That’s all it took,” the rep wrote on Facebook. “I was sold that this was fate, and these 2 belonged to each other.”

After officially bringing home Emerson, Nick began to teach his new dog how to communicate.

Because of their disabilities, vocal and sound cues wouldn’t be effective so instead, Abbott has relied on sign language to teach Emerson commands of “sit,” “lay down,” and “come”, according to his mom Richelle.

“If Nick reaches up and shakes his ear lobe, Emerson will bark — it’s so cute,” she told GMA, adding that the pair heavily rely on each other. “It’s amazing. Whenever they’re together, Emerson is always finding a way to lean on Nick.”

In the time since the adoption, Abbott has created a joint Instagram account with Emerson to document their new life together as “two deaf boys and their adventures! 🐶”

“Please follow Emmy and I on our journey though life together. We will share updates, new tricks learned, and our adventures!” Abbott wrote in a post on Tuesday.

As for NFR Maine, the rep said on Facebook that this heartwarming story goes down as her favorite and encouraged people to use Abbott and Emerson’s story as inspiration to adopt their own furry friends.

“This will go down in history as one of my all-time favorite adoptions stories. This will be the story I tell people when they ask ‘Why/how can you foster like that’,” the rep said.

“This boy deserved nothing short of a fairy tale ending and that is EXACTLY what he got!!” they added of little Emerson. 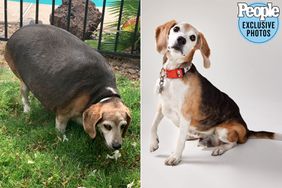